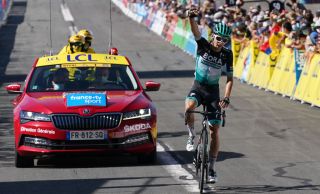 The Critérium du Dauphiné – the final key stage race before the Tour de France – is well under way. The cream of the crop of stage racing are currently taking on the final day of a race which brings five summit finishes in five days this week.

Jumbo-Visma's Wout Van Aert came out on top on the opening stage in Saint-Christo-en-Jarez before his team leader Primož Roglič took a comprehensive victory on the first major summit finish of the Col de Porte on stage 2. Davide Formolo and Lennard Kämna took stages 3 and 4, with the latter seeing Roglič, Egan Bernal, Steven Kruijswijk and Emanuel Buchmann all leave the race.

Cyclingnews will be bringing you full live coverage, reports, results, news and analysis before, during and after the race.

Read on to find out how to watch the 2020 Critérium du Dauphiné via live stream, no matter your location, with ExpressVPN.

10 riders to watch at the 2020 Critérium du Dauphiné

Despite the withdrawal of several big contenders, a number of Tour de France team leaders will be testing their mettle on the final day's mountainous course.

Jumbo-Visma still have Tom Dumoulin as they test out seven-eighths of their Tour squad. At Ineos, Geraint Thomas, Chris Froome and Pavel Sivakov remain.

Summit finishes come every day of the race, which features 27 categorised climbs. Highlights include finishes at the HC-rated Col de Porte, the first category Saint-Martin-de-Belleville and two second-category finishes at Mégeve.

Check below for all the details of how to watch all the action at the Critérium du Dauphiné.

The Critérium du Dauphiné will be aired comprehensively across a number of networks, and will be aired live across Europe, Asia and Australia via Eurosport and on the Eurosport Player.

The GCN Race Pass, available on the GCN app, is also airing the race in the UK and Australia. Access in the UK will set you back £39.99 for a year, although a special offer currently lets you subscribe for just £19.99. The special offer in Australia – until August 12 – is AU$59.99, and then rises, only a little, to AU$64.99. There's also an option to pay for the Race Pass month-by-month, although the year pass is much better value.

British broadcaster ITV will also show highlights of the race daily at 7pm on their ITV4 channel.

In the USA, another option lies in NBC Sports Gold, which will set you back $54.99 for a year's subscription that includes a number of other major races.

The race will also be shown on various broadcasters around Europe, including Rai Sport in Italy, RTBF in Belgium, and on France 3 in France.