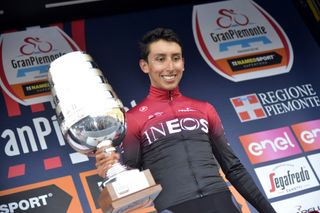 After a successful season restart with Strade Bianche, Milano-Torino and Milan-San Remo, the Italian racing season continues on Wednesday with Gran Piemonte, the final meeting in the country ahead of Saturday's Il Lombardia.

There's a varied start list for the race, which has changed considerably over the years, with Mathieu van der Poel (Alpecin-Fenix) the biggest name to compete at the hilly classic.

Cyclingnews will be bringing you full live coverage, reports, results, news and analysis before, during and after Gran Piemonte. Read on to find out how to watch the race via live stream, no matter your location, with ExpressVPN.

Van der Poel hasn't quite looked at his dominant best since the restart, though his 2019 Amstel Gold Race win is proof that he can certainly grab the win here.

He'll be up against a wealth of climbing talent and interesting prospects at the race, not least 2015 Vuelta a España winner Fabio Aru (UAE Team Emirates). He's joined by teammates Diego Ulissi and Valerio Conti.

Vincenzo Nibali (Trek-Segafredo) is a late call-up and will be joined by Giulio Ciccone. Other Italian talents to line up Alessandro De Marchi (CCC Team) and Piemontese Giovanni Visconti (Vini Zabù-KTM).

The in-form Aleksandr Vlasov (Astana) is another to watch, having won the Mont Ventoux Dénivelé Challenge last week. Teammate Ion Izagirre can contend, too.

Gran Piemonte has changed a lot through the years, with the varied terrain of the northwestern region providing opportunities for all types of riders.

The 2019 race brought a largely flat day before a summit finish on Oropa, while the 2016 and 2018 editions were sprinter friendly. Before that, the race favoured puncheurs and sprinters as the route was chopped and changed.

This time, 13 major hills fill the parcours, with barely a metre of flat road en route to the hilltop finish in the wine-making region of Barolo.

Check below for all the details of how to watch all the action at Gran Piemonte.

Gran Piemonte will be aired comprehensively across a number of networks, and will be aired live across Europe, Asia and Australia via Eurosport and on the Eurosport Player.

The GCN Race Pass, available on the GCN app, is also airing the race in the UK and Australia. Access in the UK will set you back £6.99 per month or £39.99 for a year, although a special offer currently lets you subscribe for just £19.99. The special offer in Australia – until August 12 – is AU$59.99.

The race will also be shown on various broadcasters around Europe, with Rai Sport carrying the rights in Italy.