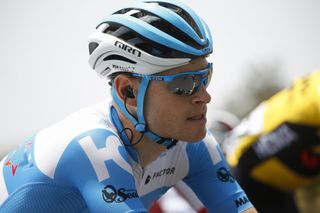 Israel Start-Up Nation’s Ben Hermans on the opening stage of the 2020 Tour Down Under (Image credit: Bettini Photo)

Israel Start-Up Nation's Ben Hermans will return from injury at the Vuelta a Burgos on Tuesday, sufficiently recovered from a fractured shoulder and broken collarbone as a result of a crash at the Tour Down Under in January.

While his injuries prevented the 34-year-old Belgian from racing in February and into March, much of Hermans' recovery has coincided with professional cycling's enforced shutdown of competition due to the coronavirus pandemic, and he'll therefore join a peloton of riders who also haven't raced for much of the first half of the year.

Hermans told the Belgian media at the weekend that he didn't have any great concerns about travelling to Spain, despite the threat of COVID-19 infection still being present, and that he was just looking forward to being able to race again.

"I think you should be more afraid of going to a shopping centre than going abroad and keeping everyone at a distance," he told Het Nieuwsblad on Saturday. "Since 2014, I've always kept a canister of disinfectant foam with me, which kills even more bacteria and viruses than alcohol hand gel. All major teams have been doing that for a long time. Every day I disinfect my hands, everywhere I go. If you don't want to get sick, you have no other choice.

"I like racing in Burgos. It's a nice race, and I usually perform well there, plus it's usually nice and warm," he added. "But these are special circumstances now. At the moment, things look OK, but I'm waiting for what the UCI say, as to whether it's safe or not, as I'm supposed to fly to Bilbao on Monday morning.

"I'd actually prefer to drive, but then you lose two days," continued Hermans. "Not that I'm afraid to fly, because I think it's safer now; there didn't used to be as many hygiene measures. Five times out of 10, I used to come home with a cold."

Life at home was also set to make things more complicated for Hermans' situation in that his wife was imminently due to give birth.

"I don't want to have to think about the baby being born next week as I race in Burgos. I hope it happens by Monday," he said on Saturday.

However, the team announced on social media that Hermans' wife had given birth to their second child on Sunday, freeing him up to travel to Spain this week to take part in the five-day stage race.