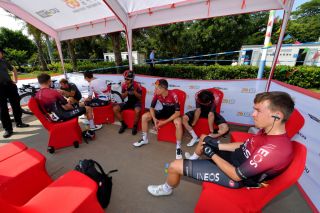 Kristoffer Halvorsen is one of a number of riders bidding farewell to their current teams at this week's Tour of Guangxi. The 23-year-old is departing Team Ineos at the end of the year and moving on to EF Education First after two years at the British squad.

Halvorsen, U23 road race world champion in 2016, joined Sky - as the team was then known - at the start of 2018, and has since taken two wins, both this season. His stage triumphs at the Herald Sun Tour and Tour of Norway have stood out as the young Norwegian continues to learn the WorldTour ropes.

"It's been a pretty good season, with some wins," he told Cyclingnews at the start of stage 2 of the Tour of Guangxi, in Beihai.

"But on a lot of occasions I have been nearly up there but not quite. That is something to work on."

Three runner-up spots, including at the Bredene-Koksijde Classic behind Pascal Ackermann, and five further top-five placings, have shown Halvorsen's consistency in the sprints, but there's a sense that there's still progress to be made to reach the next level – not unusual for a rider of his age.

"It's a big opportunity," Halvorsen says of the move to EF. "We've worked out a plan for my development in the future. For sure the big focus will be on my development and to improve in the sprints."

EF Education First are not a sprint-oriented team, but since the heyday of Tyler Farrar, who won four Grand Tour stages back in 2010, they have struggled to pin down a consistent fastman who can bring in results through the season.

Stage 2 winner Dan McLay, Sacha Modolo (both departing at the end of the season) and Wouter Wippert (who left in 2018) have been the team's sprint hopes in recent years, though across their six combined seasons with the team, the trio have brought in just six wins.

There's hope that Halvorsen can develop into a more consistent force, with team CEO Jonathan Vaughters saying that it's up to them to help him realise his talent.

There are bigger dreams, too, with Vaughters saying: "Halvorsen is our ticket to getting that last one over the fireplace," referring to his hope that the Norwegian can bring the team the last Monument win - Milan-San Remo - to complete the set.

Gabriel Rasch, Halvorsen's current directeur sportif at Ineos, sees the Italian race as one where he could succeed in future, adding that he has progressed well since joining the team.

"He's a big talent," Rasch said. "I think he's progressed a lot as a rider this year, and I think it's just a matter of time before he'll start getting good results. He's still lacking a little bit to be up there with the best but Milan-San Remo could be a race for him in the future.

"In general, we from the DS group would've liked him to stay, but I guess he had a lot of offers and he wanted to get his future sorted as quickly as possible."

EF was the offer he chose, of course, and despite the talk of a future San Remo challenge, the man himself stayed quiet about his focus next season. He said that he has "no specific goals just yet", adding that he's focussed on supporting Chris Lawless and Ben Swift at his last race with Ineos.

"It's my first pro team and I've had some great times here," he said. "I'll be grateful to them for giving me my first opportunity as a professional."