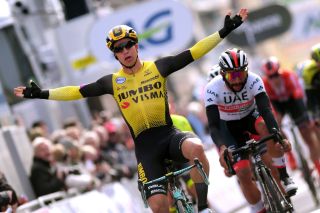 Dylan Groenewegen has formalised a four-year extension with Jumbo-Visma that will see him sprinting in the yellow and black jersey through the end of 2023. With fifteen victories this year, the 26-year-old Dutchman has become one of the top sprinters in the peloton and he's convinced that he's only getting faster.

"I'm now 26 years old, so I'm still getting stronger," Groenewegen said in a team press release. "I joined the team at the age of 22. Since then, I have improved a lot. This happened to every rider who joined the team."

Groenewegen joined the professional ranks in 2012 with Continental Cyclingteam de Rijke where he spent three years before moving up to Professional Continental team Roompot-Oranje.

He got his first shot at the WorldTour in 2016 with LottoNL-Jumbo where he has stayed through the team's transition to Jumbo-Visma. In the last four years he has flourished into one of the top sprinters on the WorldTour securing four stage wins at the Tour de France. He has also won five stages at both Tour of Britain and Tour of Norway, and three stages at Paris-Nice. In the one-day races, he has found success at Kuurne-Brussel-Kuurne and Driedaagse Brugge-De Panne.

"We started at zero and look where we are now," Groenewegen said. "I am where I want to be and the team is where it wants to be. This team is doing very well. When I indicate things that can be improved, they will be examined and the people in the team will start working on them. That's the deciding factor for me to stay here."

Roglic went on to secure the overall title at the Vuelta a España.

Groenewegen said that part of the team's success is management's ability to accept rider feedback and the development of equipment. He attributed some of his own success the support he receives from a strong lead-out team and to the confidence that has developed between himself and Jumbo-Visma during the last four years.

"Everything is taken into consideration for me to be able to sprint as fast as possible," Groenewegen said. "This gets better every year. Of course you also have a look at other teams, but I really feel at home here. We have reached a good agreement. I have what I want here. So why change teams?

"Trust in each other is very important. I feel the confidence the team has in me and I think the team feels the confidence I have in them. The guys around me are doing great. Looking at this year, you can see that I have a super train around me. I'm sure that by staying here, I'll continue to grow. I would like to take on that challenge with the team."