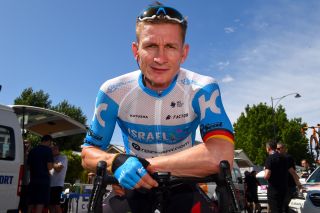 André Greipel at the 2020 Tour Down Under (Image credit: Bettini Photo)

André Greipel (Israel Start-Up Nation) has undergone successful surgery on his fractured shoulder, which he injured in a training crash near his hometown of Cologne last week.

The German, a new signing with the Israeli team for 2020, fractured the glenoid rim of his left shoulder, and will be out of action until May. The team reported that he will begin a rehabilitation process on Monday.

Greipel was out training with new teammate Rick Zabel last Tuesday when he hit the deck after slipping on a wet and muddy section of the road.

Greipel out for three months with shoulder injury after training crash

Greipel starts Tour Down Under with hopes of rediscovering old form

"A car came in our direction, so we went single file on a small road," Greipel said at the time. "There was water and mud on the road, and somehow I came off the road and lost my balance. My front wheel slipped, and I slipped towards a rock with my head and shoulder first."

The 37-year-old sprinter was set for a fresh start with ISN in 2020, having endured a tough campaign with French squad Arkéa-Samsic last year. In October, he announced that he and the team had come to an agreement to terminate his contact a season early.

Rumours swirled about a pending retirement or possible link-up with Mathieu van der Poel at Alpecin-Fenix before he signed with ISN in early November.

At the team presentation in December, Greipel told Cyclingnews that it was an "easy decision" to join the team, that he still had the same level of ambition and motivation to race, and that he was looking forward to working with Nils Politt during the spring Classics.

Greipel's recovery timeline now means that he'll miss out the cobbles, races where he has excelled in recent years, often racing in the break, and taking a top result of seventh at the 2017 edition of Paris-Roubaix.

The team has enjoyed a solid start to 2020, its first season at WorldTour level. Rudy Barbier delivered the first win of the season at the Vuelta a San Juan and took two further podium spots at the race. Meanwhile, Mikhel Räim (Herald Sun Tour), Itamar Einhorn and Edwin Ávila (both at Tour Colombia 2.1) have also taken a podium place apiece.

ISN news Bulletin:@AndreGreipel undergone a SUCCESSFUL surgery in the Orthoparc Clinic in Cologne . Doctors report that the displaced fracture of the Glenoid rim was successfully re fixed . André will start a rehab process Monday and expect to get back to racing during May. pic.twitter.com/O7dHDmaAczFebruary 14, 2020