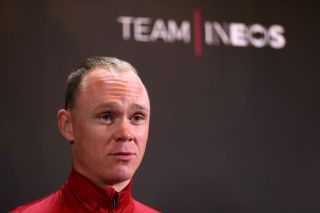 The organisers of the 2020 Giro di Sicilia have said they're ready to welcome Chris Froome to the four-day race in April. Froome is continuing his recovery and return to racing after suffering multiple fractures during last year's Critérium du Dauphiné.

After a setback to his recovery in November, Froome has confirmed he will return to racing at the UAE Tour in late February. He has recently completed an altitude training camp in Tenerife and is focussed on return to top form for the Tour de France.

The UAE Tour is organised, like the Giro di Sicilia, by RCS Sport. The organisation enticed Froome to ride the 2018 Giro d'Italia, which he went onto win with a solo attack over the Colle delle Finestre dirt road.

RCS Sport offered Froome and Team Ineos a place in the Sicilian stage race when the route was presented in Milan on Monday.

"Relations with the team are good. It'll perhaps depend on what programme he (Froome) opts for after the Emirates. If there's an opportunity (for Froome to ride the Giro di Sicilia) we'd be happy," race director Mauro Vegni told La Gazzetta dello Sport on Tuesday.

Team Ineos are due to race in both Belgium and Spain in early April and told Cyclingnews they currently have no plans to ride the Giro di Sicilia. However, Team Ineos occasionally runs a triple race programme and Froome has still to reveal his race programme for after the UAE Tour.

RCS Sport has already confirmed the presence of three WorldTour teams at the 2020 Giro di Sicilia, including 2019 winner Brendon McNulty, who has stepped up from Rally Cycling to UAE Team Emirates.

The Giro di Sicilia will start in Siracusa on the east coast on April 1 and end in Mascali near Catania on April 4 after three rolling stages in different parts of the island and a final mountain stage on the slopes of the Mount Etna volcano.

The final stage of the Giro di Sicilia will climb the via the same Piano Provenzana road that will be used by the Giro d'Italia, turning off two kilometres from the finish to head to the northern coast. The climb from Linguaglossa will be 16km long, with an average gradient of 7 per cent.

The Giro di Sicilia was once an early-season training race, offering European teams a chance to race in warmer weather in February. Giuseppe Saronni was the last winner in 1977, before the race was recreated in 2019 and won by McNulty.

With Sicily keen to promote itself as a tourist destination, the island has welcomed professional cycling once again.

"We are bringing Il Giro di Sicilia back to its former glory and we want to continue on this path." Vegni said.