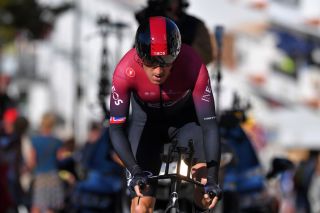 It was a quiet but successful Volta ao Algarve for Geraint Thomas, who ended the week in 21st place overall after finishing 12th in the final-day time trial. It's a race he's won twice before, but this time around it was all about building a base for bigger goals to come.

This year, the Welshman is entirely focused on the Tour de France, the race he won in 2018 before finishing runner-up behind teammate Egan Bernal last July.

Though Algarve is a key early-season testing ground, there was no sign of worry on Thomas' face at the end of the race, with the Team Ineos man safe in the knowledge that there's plenty of time to get fully up to speed.

"It was alright, I guess. It's what to be expected really, but obviously when you're in a race you want to be at the pointy end of it," Thomas told Cyclingnews after finishing a lengthy warm-down session on the turbo trainer in Lagoa.

"I haven't done too many efforts for one reason or another this winter, so it's the first big block of intensity, really. It's a bit of a shock to the system to start with, especially on the flat days, you know. Usually they're just cruisy days, but with the kicking out of corners and everything…

"But yes, it's a good bit of work in the bank now, and we'll keep pushing on."

Last year, Thomas started off at the Volta a la Comunitat Valenciana, finishing 44th before a bumpy build-up to July saw him take third at the Tour de Romandie and then crash out of the Tour de Suisse, just weeks before the Tour start in Brussels.

A year on from the start of his 2019 campaign, Thomas said that he felt better in Algarve than he did back then, adding that it's all about the process, rather than results, on the road to the Tour. He cited last season's build-up as proof that laying down a marker ahead of July isn't a prerequisite for success at the race.

"I definitely feel better than this time last year. Obviously, it's just different after you've won the Tour because everything else is – no disrespect to Algarve – but everything else is quite low on the list then. So, there's a lot more emphasis on July.

"I didn't really have that big result going into the Tour and I think I had the legs there. I was third in Romandie but obviously crashed out of Suisse. So, I don't think it's necessary, but obviously it helps – it's nicer to have a bit more confidence going in. But I'm confident in what I do in training."

Froome and the Tour

Thomas will head into the Tour as one of possibly three potential race winners on his own team, should Chris Froome get fully back up to top form after his brutal injury last year.

While he was pleased to see Froome's successful comeback on stage 1 of the UAE Tour earlier in the day, Thomas dismissed any notion that having three men in contention for victory would cause tension within the squad.

"Of course, it's good to see him back," said Thomas. "It's phenomenal how he's turned that around. All credit to him, the hard work he puts in and the dedication he's shown. It's great to see him back racing again.

"At the end of the day, I just worry about myself, and as long as I get there in the best shape possible, I'll go from there. We've done it before where other teams haven't, we've worked well together, and there's no reason why we can't do it again."

Next up for Thomas is a return to home in Monaco for training ahead of his next race, Tirreno-Adriatico. A stint in Tenerife will follow before taking on the Tour of the Alps and Tour de Romandie in April. Despite a quiet start in the south of Portugal, it's full steam ahead to the Tour de France.

"It's all building up to July," Thomas said.