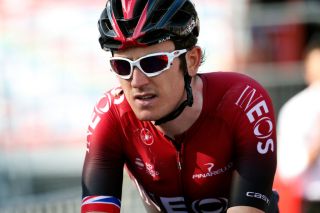 Geraint Thomas (Team Ineos) gets his 2020 season underway at the Volta ao Algarve this week, returning to the race he triumphed at in 2015 and 2016. This time around it'll be a different story, however, with the Welshman stating that the race will be more a way of easing himself back into racing rather than going all-out for overall victory.

This year, the 2018 Tour de France champion is following the same early path through the calendar as he did two seasons ago. On that occasion, he took a time trial stage victory en route to second overall at the Volta ao Algarve, though he insists that he's not in the same shape this time around.

"It's been a good off-season. I've done some good, decent work," Thomas told Cyclingnews at the start of stage 1 in Portimão. "I'm not doing many efforts at the moment though, just riding my bike.

"I feel alright. I feel good enough to get stuck into the race. Not for the win, but certainly to help the guys and to try and get the win with them."

For Thomas, who last raced at the Yorkshire World Championships in late September, the race is all about getting back into the thick of the action. Michał Kwiatkowski and Ineos' newest addition, Rohan Dennis, are the men for whom he'll act as super-domestique.

"It's the first race of the year, it's a nice place to come for that. The sun is out, there's good roads, and I have nice memories as well. So I'll just help the guys and get a good, solid five days in.

"Those two [Kwiatkowski and Dennis] have already had racing this year, and they're going really well. We'll play our cards and I'll do what I can for them. Obviously if I feel ok, I'm not going to sit up and lose time for the sake of it, but I'll just work when I have to and see how I am.”

Stage 1, a 195km ride from Portimão to the neighbouring town of Lagos, should be one for the sprinters, so for Thomas and Team Ineos it's all about staying out of trouble. After a long journey to the south of Portugal, the big ride will help him gett up to speed ahead of stage 2's summit finish on the Alto da Fóia, the first GC flashpoint of the race.

"Yesterday we had quite a long travel to get here and we got to the hotel quite late," Thomas said. "It'll be good to get a good 200km in the legs and then open up because tomorrow is going to be a tough day."

The long, rolling opening stage won't give much indication of Thomas' form at this starting point of his season, so for Ineos-watchers eyes will indeed be on Thursday's summit finish. Will he get off to another flying start, or will he be keeping his powder dry, as he says?