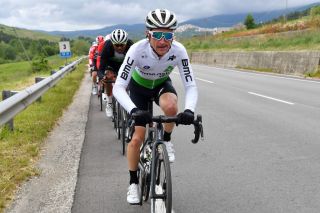 Two-time Amstel Gold Race winner Enrico Gasparotto (Dimension Data) has switched nationalities from Italian to Swisse, with the move confirmed by a change on his profile page on the UCI website.

The 37-year-old was born in Sacile in the eastern Italian region of Friuli-Venezia-Giulia, though has lived in the Italian-speaking canton of Ticino for several years. In order to acquire Swiss citizenship, the canton requires residents to have lived there for 12 years, a demand that Gasparotto has met.

The move means that Gasparotto can now represent Switzerland at the European Championships, World Championships and Olympic Games in Tokyo next season.

Somewhat surprisingly for a rider who has been on the podium five times at the Ardennes Classics, Gasparotto has never represented Italy at the World Championships or Olympics, despite wearing the tricolore jersey after winning the National Championships road race back in 2005, his first year as a professional.

Gasparotto, who re-signed with his current team – which will be re-branded as NTT for 2020 – will have a chance to represent Switzerland at his 'home' Worlds in Aigle-Martigny next season, while also competing for one of four spots available to Switzerland at the Tokyo Olympics road race.

He is far from the first rider in the pro peloton to swap nationalities. 1994 Paris-Roubaix winner Andrei Tchmil first represented the Soviet Union before switching to Moldovan, Ukrainian and Belgian nationalities during his 13-year career.

Mads Pedersen starts season at Tour Down Under

World champion Mads Pedersen is expected to kick off his 2020 campaign in Australia at the Tour Down Under, returning to the race after a year away.

The Dane, who started his 2017 and 2018 seasons at the race, will be joined at the race by Trek-Segafredo teammate Richie Porte. The Australian won the Tour Down Under back in 2017 and has won the often-decisive Willunga Hill stage every year since 2013.

Pedersen made his debut in the rainbow stripes at the Tour de l'Eurométropole back in October, going on to race the Tre Valli Varesine and Milano-Torino before ending his 2019 season.

Next year he'll race the spring Classics as a team leader after John Degenkolb's departure from Trek, and has said he won't put himself under pressure to win next year, adding that he has nothing to prove and wants to enjoy his year in the rainbow stripes.

Ex-pro Mauro Santambrogio has been banned from racing for three months for participating at a fixed-gear criterium after declaring that he had never been sanctioned for doping, a pre-requisite for obtaining a licence to race in Italy.

The Italian, who raced for LPR, Lampre, BMC and Vini Fantini during his pro career, competed in the Urbe Criterium Race – which also serves as the Italian fixed-gear National Championships in Ostia back in June.

In addition to the non-disclosure of his doping past, Santambrogio was also sanctioned for racing with a master's license which had not been validated, reported La Gazzetta dello Sport.

It's far from the first time the 35-year-old has been banned. During his time at BMC, he was twice suspended from racing by the team due to links with the Mantova doping investigation, while he was suspended for two years – later reduced to 18 months after co-operating with CIRC – after testing positive for EPO at the 2013 Giro d'Italia, where he finished ninth and won a stage for Vini Fantini.

In late 2014, shortly before he was eligible to return to racing, he was banned for three years after testing positive for testosterone. Santambrogio was due to race for Amore e Vita in 2015, and protested that he used the drug as an infertility treatment, but was banned regardless, and hasn't attempted a pro return since his ban expired in 2017.

Victor Campenaerts heads back to Namibia

World Hour Record holder Victor Campenaerts will once again kick off his year in Africa, heading to high altitude in Namibia, where he trained for two months in early 2019 before taking on the Hour Record.

The move clearly did the Belgian good this year, with the 28-year-old going on to break Bradley Wiggins' record by 563 metres back in April. Campenaerts went on to win the closing time trial at Tirreno-Adriatico, and later finished runner-up at both Giro d'Italia time trials.

Campenaerts, who moves from Lotto Soudal to NTT Pro Cycling next year, is targeting the Olympic Games time trial next year. However, he faces a battle with Wout Aert to make the Belgian squad in Tokyo, with only one spot up for grabs alongside Remco Evenepoel.