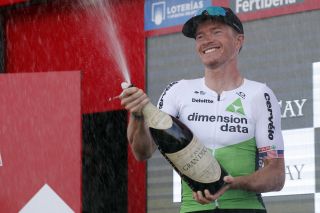 Ben King on the podium at the 2018 Vuelta a Espana (Image credit: Bettini Photo)

Dimension Data continue to reveal the riders on its 2020 roster, when the team will be known as Team NTT, with six riders, including Ben King and Enrico Gasparotto, given contract extensions.

Earlier this week the African team announced the signing of Michael Gogl, Max Walscheid and Carlos Barbero, while Victor Campenaerts was announced in August.

However, Mark Cavendish is expected to move to Bahrain-Merida, while Steve Cummings has told Cyclingnews he hopes to stay for a final season but has yet to secure a new contract.

Dimension Data also confirmed extensions for South African sprinter Ryan Gibbons, and compatriots Nicholas Dlamini and Jay Thompson. Eritrean's Amanuel Ghebreighzabhier will also spend another year with the team after riding the Giro d'Italia and finishing in the top ten on two mountain stages at the Vuelta a Espana.

Edvald Boasson Hagen, Tom-Jelte Slagter and Julian Vermote are out of contract this season but have still to confirm their futures. Italian sprinter Giacomo Nizzolo, Roman Kreuziger, Ben O'Connor, Louis Meintjes and Michael Valgren all have contract with Team NTT for 2020, with 20 riders now confirmed for next season.

Despite a difficult 2019 season and only seven minor victories, Team NTT is expected to secure a place in the 2020 WorldTour after a legal threat forced the UCI to change its qualification rules and extend the WorldTour up to a maximum of 20 teams.

"I couldn’t be happier to stay with the team," King said.

"We’re a family from all over the world united by our passion for excellence and the incredible cause of changing lives with bicycles. I’ve had amazing opportunities here and I look forward to 'moving forward' and getting the best out of myself in 2020. It’s sure to be a big year!"

37-year-old Gasparotto has enjoyed a long career that has included victories at the Amstel Gold Race in 2012 and 2016. He is often a road captain and mentor for the younger riders.

"I’m really happy to have renewed to stay on with the team for another year. I hope that with my experience and my approach to racing that I can help my teammates to improve as riders and as people. I’m not young anymore but I’m still a dreamer and absolutely love the Classics, so I will continue to dream in 2020," the Italian said.