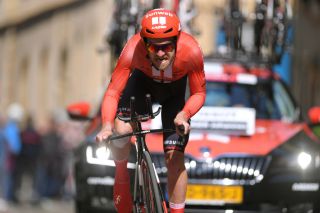 Johannes Fröhlinger has brought the curtain down on a 13-year pro career, with the final nine seasons spent in the service of his team leaders at Team Sunweb in its various guises, starting as Skil-Shimano in 2011.

The German began his pro career at Gerolsteiner in 2007, before joining Milram in 2009. That early career period was characterised by an attacking riding style, which netted second place on stage 5 of the 2008 Giro d'Italia behind winner Pavel Brutt (Tinkoff) – the same stage on which Britain's David Millar broke his chain and launched his bike over the crowd barrier in annoyance at not being able to contest the stage victory – and third place on stage 7 of the 2009 Tour de France.

Fröhlinger was part of a nine-man breakaway on the Tour stage from Barcelona to Andorra Arcalis, but was unable to stick with eventual stage winner Brice Feillu (Agritubel) and Christophe Kern (Cofidis) on the final climb up to the finish.

In later years, however, Fröhlinger learned to regularly adopt the role of 'road captain', using his experience and abilities to work for the good of his teammates.

"As a teenager, I dreamed of becoming a professional cyclist and I'm really happy to have spent so many years living my dream," said Fröhlinger on his team's website.

"I could have never imagined participating in one Grand Tour, but today I look back on 15 three-week-long races, 10 of which were at the Vuelta a España, which is really special," he said.

"I'm thankful and proud to look back on my 13-year professional career at the highest level. A special thanks goes to Team Sunweb: I spent the main part of my career over here and shared some unforgettable moments."

The team reported that Fröhlinger now wants to study to become a coach in order to help develop young riders, and would be open to returning to the professional side of cycling as a coach later on.

"We've spent a lot of good years with Johannes since he joined the team in 2011," added Sunweb coach Marc Reef. "He's always been a rider that is willing to work in support of others and be there for the team when called upon.

"He's been a strong part of the team's development from where we started until now, using his experience and role within the team to help and guide the younger riders both on and off the bike at races.

"It's been a real pleasure to have him within our ranks and he will always be a close friend of the team. We wish him the best of luck for the future," said Reef.