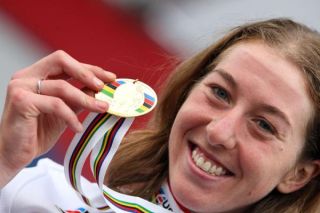 Counsel for Richard Freeman were due to give evidence from Olympic champion Nicole Cooke at his medical tribunal hearing before Shane Sutton stormed out and refused to return to complete cross-examination.

According to the BBC News, Freeman's counsel Mary O'Rourke said she had the permission of the 2002 Commonwealth Games gold medallist to put evidence to Sutton, but the former British Cycling technical director left before that could happen.

The gold medallist is understood to be Cooke, one of only two British cyclists together with Scottish sprinter Chris Hoy to win events at the Manchester event.

Cooke has been critical of British Cycling and Sutton when the Australian was under fire for sexism and discrimination in a complaint filed by sprinter Jess Varnish. Cooke supported the sexism claims along with fellow Olympic champion Victoria Pendleton.

Sutton appeared voluntarily before the tribunal earlier this month after Freeman claimed that the order of 30 sachets of the testosterone supplemental drug Testogel was made for Sutton's personal use, a claim the Australian vehemently denied.

Freeman open to doping charges under updated statute of limitations

The General Medical Council alleges that Freeman made the order with the intent of boosting the performance of an athlete - one of four of 22 charges that Freeman is contesting.

The GMC allege Freeman knew the order was not clinically indicated for a non-athlete staff member, that he ordered the Testogel believing or knowing it would be administered to an athlete (Testogel is banned in and out of competition) and lied to cover up this motivation. The GMC is using the charges to challenge Freemen's fitness to practice medicine.

The tribunal is set to decide on Tuesday whether Sutton's testimony could be entered into evidence without having completed the cross-examination. O'Rourke wants all of the contested charges against Freeman thrown out if Sutton's testimony is axed, saying that without Sutton's statements the four charges "fall apart".

GMC attorney Simon Jackson argued that Sutton left the hearing as a "direct consequence" of O'Rourke's "bullying" after she called him a "liar" and "doper", saying the accusations were designed to put Sutton under pressure.

Jackson also claimed that some of the evidence put to Sutton came from anonymous sources, but O'Rourke said she had names to go with the statements. She said Sutton's departure denied her ability to give more evidence from "three individuals" and from Cooke and her father who volunteered to be named.