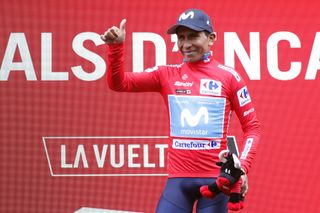 Nairo Quintana has returned to the lead of the Vuelta a España for the first time since the Movistar rider won Spain’s Grand Tour outright in 2016, but the Colombian is not optimistic about his chances of keeping it, at least in the short-term.

On stage 9, Quintana and teammate Alejandro Valverde alternated attacks on Primoz Roglic (Jumbo-Visma) prior to the Cortals d’Encamp finale, then when both Miguel Angel Lopez (Astana) and Roglic crashed and fell, the two Movistar contenders found themselves ahead.

Another attack by Quintana brought him into close contact with teammate Marc Soler, part of the early break, and after timely support by the Catalan, Quintana crossed the line in second place, 25 seconds ahead of Roglic.

However, Quintana was quick to recognise that with a scant six-second advantage over Roglic on GC following the stage, his chances of remaining in red on Tuesday afternoon following the Pau time trial were minimal.

“I kept on trying to stay ahead and distance my rivals,” Quintana, who had said his main goal in the Pyrenees would be to gain time on Roglic, told reporters at the line.

“It will be difficult to stay in the lead, even if being in red is always extra motivation.”

A surprising winner of stage 2’s transition to Caple, but in difficulties on Javalambre’s summit finish on stage 5, Quintana was much stronger 48 hours later at the much steeper finale of Mas de la Costa. Then on the Vuelta’s sole Pyrenean stage, the Colombian said he found himself feeling even better.

“I’ve had some uneven days in this first week, but today was a good day for me,” Quintana said.  “Andorra was a very tough stage with the cold and hail. We never can have enough protective gear in such weather.”

With riders, race followers and the public all trying to use the same cable cars to get down off the climb to the valleys of Andorra below, and an  electrical storm causing extra safety measures to be applied to  the cable car system, lengthy queues developed, and Quintana, looking out of the press conference truck windows, said, “I can see everybody is shivering as they are waiting. There are riders waiting in the cold, and that will take its toll on them in the days to come.”

Asked by one journalist why Soler had not seemed at all pleased to have to wait for Quintana, rather than going for the stage himself, Quintana said, “The team order came through that Marc should wait a and work for me. Today’s strategy was to try and distance our rivals, and I’m very grateful for the work that Marc did.”

Having said that Valverde was the leader for the Vuelta earlier this week, Quintana argued that in fact the team’s idea was “to see what Alejandro and me could do in the race, supporting whichever rider was better placed."

"We’ve both been protected riders and we’ve worked together to get the lead," he said "There’s still a long way to go, though.”

Four riders are currently at the top of the GC classification within a 20 second margin, well ahead of stage nine winner Tadej Pogacar (UAE Team Emirates), who is 1:42 back, but as Quintana said the most likely scenario after the Pau time trial is that Roglic moves into  the lead. However, in the mid to long term, he was optimistic about his chances.

“I’d have to do a spectacular time trial not to lose the red jersey, which is surely what’s going to happen," he said. "But once we’ve got past that point, the team will go on fighting to get the jersey back. And hopefully we’ll have it at the end of the race.”