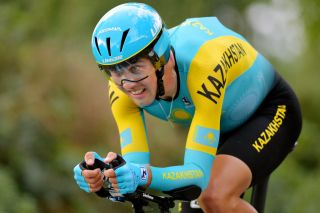 Daniil Fominykh has re-signed with Astana for the 2020 season, which will be the two-time Kazakh time trial champion's seventh year with the WorldTour outfit.

Fominykh joined the team from its Continental feeder team for the 2014 season, during which he won his first national TT title. He went on the take his second in 2018, and in April this season won the individual title at the Asian Cycling Championships in Uzbekistan, where he beat China's Chun Kai Feng – who rides for the Bahrain-Merida trade team – by just 12 seconds.

In 2016, Fominykh broke two vertebrae after crashing over a wall and falling into a ravine on the final stage of Paris-Nice, requiring a major rescue operation to get him out. However, following successful surgery, he was back racing at the Vuelta a Burgos by August, and was part of the Astana squad that won the team time trial on stage 2 of the Spanish race.

"I'm very happy to extend my contract with the team," said Fominykh in a press release. "I think I've had a good season.

"One of the main goals was the Asian Championships, where we had to perform as successfully as possible. I managed to arrive at that event in good shape, and I'm happy that I managed to bring victory to our country in the ITT, and that I was able to help my teammates to succeed in the road race," with Astana and Kazakhstan teammate Yevgeniy Gidich taking gold, while Fominykh finished sixth.

"In general, the second part of the season turned out quite well," continued the 28-year-old. "I had a good result at the Kazakhstan National Championships [third in the time trial and eighth in the road race], but also in several races I tried to do everything possible to help Alexey Lutsenko: at the Arctic Race of Norway and in the Italian Classics."

Astana manager Alexander Vinokourov added: "Daniil is a very good helper, and a loyal rider who's always in the team leader's corner, ready to support him in any moment.

"We had an important Asian Championships this year, where we were fighting for places for the Olympics, Daniil showed himself really well – not only winning the individual time trial race, but also helping Yevgeniy Gidich to take an important win for Kazakhstan [in the road race].

"It's always nice to have such a good rider in the team, and I'm happy to renew with Fominykh for another season," he said.