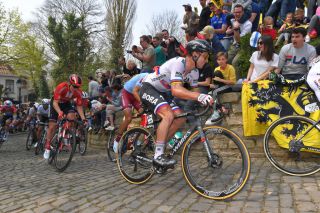 The 2020 Tour of Flanders men's and women's routes have been reduced for the event's rescheduled October 18 date, with the iconic Muur van Geraardsbergen cut from the parcours. The men's race has been reduced to 241km, while the women's race is now 135km in length. The biggest and most prestigious race in Belgium will still cover the final circuits of the Oude Kwaremont and Paterberg climbs before the finish in Oudenaarde.

Race organiser Flanders Classics has also reduced the distances of Brabantse Pijl, Gent-Wevelgem and Scheldeprijs, claiming it was to help riders recover during the intense race programme.

"The quick succession of races on the newly proposed calendar will require quite a bit of organisation on the part of the teams. To provide the teams and riders with enough opportunity to rest between the races that will follow each other in rapid succession in October, Flanders Classics has decided, in consultation with various teams, to slightly shorten the distance of its races," Flanders Classics said when revealing the details of the race routes.

On Friday, the UCI announced the final dates for the revised calendars for the men’s and women’s WorldTour, confirming several further date changes and event cancellations due to the COVID-19 coronavirus pandemic.

Il Lombardia will move from October 31 to August 15, and Milan-San Remo will take place on August 8, while three events on the top-tier women’s calendar were cancelled. The primary focus was placed on the three Grand Tours which have all been rescheduled; Tour de France (August 29-September 20), Giro d’Italia (October 2-25) and a shortened Vuelta a España (October 20-November 8). The men's and women's WorldTour calendars will restart with the Strade Bianche races in Tuscany on Saturday, August 1.

The cobbled Classics are packed into October, largely overlapping with the Giro d'Italia, while the Tour de France and World Road Race Championships dominate September.

The men's De Brabantse has been reduced to 184km and will include 26km of climbs, with the women's race staying at its planned 122km length. The men's Gent-Wevelgem will cover 238km, starting in Ypres, but cutting out a section in France, with a third ascent of the Kemmelberg inserted to make up for the lost climbs. The women's route remains largely unchanged, with the Kemmelberg as the final climb, before a 35km ride to the finish in Wevelgem.

The men's Scheldeprijs has been reduced to 183km but will visit the exposed Zeeland area of southern Netherlands. The route then returns towards Schoten for three finishing circuits and the highly likely sprint finish.

The men's Tour of Flanders will again start in the north of Belgium in Antwerp, while the women's event rolls out of Oudenaarde. The changes to the routes come after the first climb of the Oude Kwaremont. Much to the anger of the mayor of Geraardsbergen, the Tenbosse and Muur van Geraardsbergen have been removed and replaced with the Valkenberg.

After the second ascent of the Oude Kwaremont, the men will head onto the now familiar 50km circuit, starting with the climb of the Koppenberg, followed by the Mariaborrestraat, Steenbeekdries and Taaienberg. After the Kruisberg/Hotond in Ronse, the route returns to the Oude Kwaremont and Paterberg.

The women will compete on the same finale as the men, with the finish in Oudenaarde just 13km away from the top of the Paterberg.