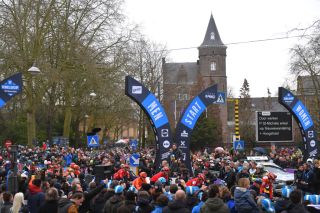 While the final two stages of the UAE Tour were called off, and doubts still surround Italian races in March such as Strade Bianche and Milan-San Remo, it's 'business as usual' for Flanders Classics amid the coronavirus outbreak, with Omloop Het Nieuwsblad going ahead as normal on Saturday.

Along with the Omloop, Flanders Classics organise a number of races in Belgium during the main spring Classics period in March and April, including Gent-Wevelgem and the Tour of Flanders.

As well as the UAE Tour, the coronavirus outbreak, which has seen more than 80,000 cases and caused more than 2,500 deaths globally, has also triggered the postponement of the Tour of Hainan and all races in China in April and May.

Speaking to Cyclingnews at the start of the Omloop in Gent, race director Scott Sunderland said he wanted to avoid 'hysteria' around the spread of the virus.

"We’ve been in contact with Belgian health and welfare authorities and they said, 'look, at this point there’s nothing anywhere in Belgium and there are no indicators that anything has to happen'. They said it should be business as usual, to wait and see what happens, and that they’ll communicate anything that needs to happen in the near future," Sunderland said.

"This is something that’s watch and see, we can’t allow this to become hysteria, or anything else; it’s purely watch and see. All the national federations have got processes and protocols in places and we’re keeping in touch and communicating with them."

Following the Omloop, Flanders Classics will put on Gent-Wevelgem on March 29, followed closely by Dwars door Vlaanderen, the Tour of Flanders, Scheldeprijs and Brabantse Pijl.

Sunderland said he had no concerns at this stage about those races all going ahead in normal fashion.

"Nothing changed at all for today’s race and there’s nothing on the radar that we’ll be doing, so, barring anything dramatic, it’s watch and see."

While the fears surrounding the Italian races stem from the spike in cases in the Lombardy region, where Milan-San Remo starts, the UAE was called to a halt due to suspected cases that were brought into the UAE from Italy.

Sunderland explained that, without shutting borders completely, there’s not much that can be done to mitigate against the threat of the virus in such international events.

"You can’t narrow it down to cycling; this is not a cycling thing," he said. "In football Gent were playing Roma on Thursday and I was walking to the grocery store and it was full of Roma fans. Where can you draw the line? Belgium is a big transit country, a lot of people go through here. Unless you’re gonna lock all the borders down, what can you do?

"It’s going to be a very bespoke situation. We saw in the UAE that they closed the hotels, but different countries are doing different things. In Switzerland they’re saying that any event larger than 1000 people is being cancelled. Is that extreme? I don’t know. You can only make those conclusions after the fact."