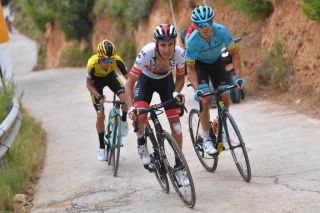 Fabio Aru (UAE Team Emirates) has pulled out of the Vuelta a España. The Italian, who was lying 54th overall after stage 12, did not take the start of Friday's stage 13 from Bilbao to Los Machucos.

Aru has left the race on advice of the UAE Team Emirates medical team, after analysis found that he's suffering from muscular damage, which is worsening as the race goes on.

"The analyses carried out with the medical staff of the team have shown a strong muscle damage that does not allow me to recover from the efforts," said Aru in a team statement on Friday morning.

"The situation is getting worse, so together with the team's medical staff it was decided to stop and carry out further checks. I regret withdrawing but, given the situation, it would be unthinkable to be able to continue."

The Vuelta, which Aru won in 2015, was his second Grand Tour since returning to competition after undergoing surgery to repair a constricted iliac artery in his left leg, back in April.

After returning to the peloton at the GP Città di Lugano in June, Aru has raced the Tour de Suisse, Italian Championships road race, and the Tour de France, where he finished a promising 14th overall.

UAE Team Emirates medical director Jeroen Swart commented that Aru has fully recovered from his surgery, but that "growing fatigue" and "considerable muscle damage" has forced him to withdraw from the Vuelta.

"Fabio has clinically recovered from the surgery he had undergone," said Swart to Tuttobiciweb. "During the past few months he has been training successfully and the data collected has shown his progress.

"He arrived at the Vuelta with a very good condition but, during the race, the expected performances did not arrive: he had to deal with a growing fatigue that caused huge muscular damage, consequently the decision to stop.

"We will carry out all the routine texts, which we usually perform, to analyze his training data and we will conduct sub-monthly physiological tests to try to gather more information."

Aru's Vuelta campaign started off badly in the stage 1 team time trial when the was involved in a pileup involving the majority of his UAE team after they hit a wet patch in the road.

He recovered to take fifth on stage 2, part of the surprise GC move which saw Nairo Quintana take the stage victory. He was also eighth on the summit finish at the Alto Mas de la Costa on stage 7, finishing alongside teammate Tadej Pogačar, who currently lies fifth overall.