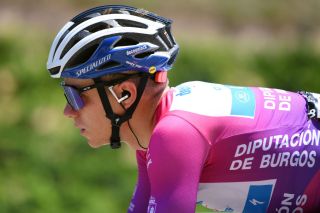 And so the beat goes on. Six months after his victories in the Vuelta a San Juan and the Volta ao Algarve, Remco Evenepoel (Deceuninck-QuickStep) continues his hugely impressive stage racing track record of 2020 at the Vuelta a Burgos on Saturday with his third GC win of the season out of a possible three.

There has been much talk this week in Burgos of how cycling has re-started ‘new normality’ at a notably high level, as riders battle fiercely to re-establish their places in the traditional hierarchy in the packed revised 2020 calendar.

But no matter how much the backdrop may change to racing - and it could hardly have changed more this year - competition-wise, it barely seems to matter to Evenepoel as the young Deceuninck-Quick Step rider continues to go from strength to strength, from Argentina to Portugal and now Spain.

Evenepoel: I won't let any chances for wins pass me by in Burgos

With each victory, it seems, the expectations continue to rocket for the 20-year-old and this latest win in the high mountains of Burgos will fuel yet more speculation as to what Evenepoel can acheive in his biggest 2020 goal, the Giro d’Italia in October.

But truth to tell, there are - as yet - no visible limits to what Evenepoel may be capable of in the future. Or as Deceuninck-QuickStep team manager Patrick Lefevere put it on Friday, “no matter what we ask of Remco, he always gives us a little bit more.”

Speaking at the finish of the Vuelta a Burgos final stage, where he took third behind stage winner Ivan Sosa (Ineos) and the eventual GC runner-up, Mikel Landa (Bahrain McLaren), Evenepoel explained that his strategy on the crucial final climb to Lagunas to Neila was to ensure he kept the lead above all.

“I didn't want to lose too much time,” Evenepoel said afterwards, “but I managed to distance a lot of GC guys and I kept Landa in my vision. So it was a perfect day for me.

“I had to suffer, I had to fight hard and it was a hard climb, harder than two days ago, but it’s nice to win overall here.”

Evenepoel praised his team for doing a great deal of hard work on the build-up to the final climb, where he made a solo defence of his own lead.

“All day we were in the front paying attention, not taking any risks with crashes and staying in position,” Evenepoel argued.

“I think that’s what you’ve got to do with a GC team, stay in the front and we did a perfect job, while it was my job to keep the jersey and it was just perfect.”

Apart from his own GC win – his seventh victory of 2020 – Deceuninck-QuickStep took home an impressive haul from the Vuelta a Burgos overall: third place on GC with Joao Almeida, two stage wins courtesy of Sam Bennett on stage 4 and Evenepoel himself on stage 3, and a Best Young Rider’s classificaton win overall for Evenepoel as well.

As for what Evenepoel can achieve from hereon in the revised 2020 calendar, the omens could hardly be better.