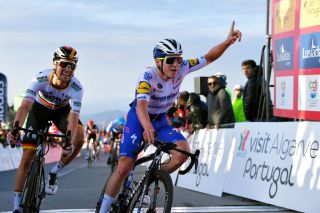 As cycling's international men's racing season shifts up several notches on Tuesday at the Vuelta a Burgos, up-and-coming Deceuninck-QuickStep star Remco Evenepoel says that his return to racing here in Spain "feels like the first day of school".

Evenepoel's natural talent makes it tempting to name him among the contenders for Burgos. Some fans will recall his stellar results in the other 'early season' events of this year – those back-to-back wins in the Vuelta a San Juan and the Volta ao Algarve in January and February, respectively.

Speaking on the eve of the Burgos stage race, however, Evenepoel refused to place himself in the category of a favourite. He didn't even have to mention the fact that while both Algarve and San Juan had time trials, both of which he won, Burgos lacks a contra reloj this year.

Evenepoel downplayed his chances by looking purely at his objectives in the rest of the year.

"To be honest, my big goals are later in the season. If there are any chances for a win here, of course I won't let it pass me by. However, I won't be getting stressed about it," the young Belgian star said. "Improving my shape is the most important part of being here."

Evenepoel said that he had had a fairly uneventful lockdown in that he did not get sick or have any bad flu, whilst going "pretty well".

For those insisting on Evenepoel having some good options in Burgos, one positive sign from previous seasons is that the summer months certainly do not seem to harm Evenepoel's form. Last year he won the European Championship time trial and the Clasica San Sebastian in early August. In 2018, in roughly the same era, he took the Aubel-Thimister-Stavelot stage race in the Belgian Ardennes.

But the 20-year-old was adamant that while he will not be sitting at the back during Burgos, there should not be excessive expectations about his chances, either. His weight, he did note, was better than it has been before, though, which augurs well for stage 3 and stage 5's summit finishes.

Asked specifically about his chances in the tough opening stage finish on the Alto del Castillo, Evenepoel said, "It's more for the guys like [George] Bennett [Jumbo-Visma] and the sprinters who can climb a bit. The most important thing, for me, is not to lose any time."

Of Deceuninck-QuickStep’s chances for Tuesday, he added: "We'll go for the win with Sam [Bennett]."

When the almost inevitable COVID-19 question came up, Evenepoel said he takes the usual precautions, wearing his mask whenever it is appropriate. But he did not want to make too much of a drama of it, either, saying, "It's not that I'm not scared; rather, I'm not thinking about it here too much, because we're here to race. I hope that people will respect that and not come too close to us when they are taking pictures."

Warming to his point, Evenepoel added: "It seems that some people really forget quickly and they don't think about the rules anymore. If they want the races to continue, they should respect the rules and, if they don't want to, they should not – and then we have a problem."