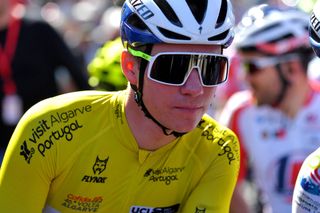 Remco Evenepoel (Deceuninck-QuickStep) is set to line up at the Volta a Catalunya later this month after Tirreno-Adriatico, a key preparation race for the Belgian in the build-up to the Giro d'Italia, was postponed due to the coronavirus outbreak.

Evenepoel is currently training in Calpe to avoid the recent bad weather in Belgium, but his plans have been knocked by the postponement of Tirreno, which was due to get underway next Wednesday.

The seven-stage race was postponed, along with other March races in Italy - Strade Bianche and Milan-San Remo - due to the restrictions placed on sporting events in the country.

Coronavirus: Deceuninck-QuickStep believe it is safe to race Paris-Nice

Evenepoel will ensure his preparation stays on track by lining up at the seven-stage  Volta a Catalunya in Spain, which begins on March 23.

"It is a stage race that closely resembles the Tirreno in terms of profile," Deceuninck-QuickStep coach Koen Pelgrim told Het Nieuwsblad.

For the first time since 2007, the race will feature a time trial, with a 21.1km course in Pla de l'Estany to be tackled on stage 2. The race features two summit finishes, on stages 3 and 4, and concludes with the hilly circuit around Montjuic Park in Barcelona on March 29.

Evenepoel will face competition for the overall title from the likes of Egan Bernal (Team Ineos) and Alejandro Valverde (Movistar).

Following the conclusion of the Volta a Catalunya, Nieuwsblad reports that Evenepoel is set to head to the Sierra Nevada in Spain for a block of altitude training. The two- or three-week camp would be likely to see Brabantse Pijl (April 15) scrubbed from his programme, but La Flèche Wallonne and Liège-Bastogne-Liège remain on his program.

Evenepoel will make his Grand Tour debut at the 2020 Giro d'Italia and will hope to ride straight into the leader's pink jersey on the opening-day time trial. How the 20-year-old will fare in his first three-week experience is up in the air, but he has underlined his credentials in the early-season by winning both races he's entered: Vuelta a San Juan and Volta ao Algarve.