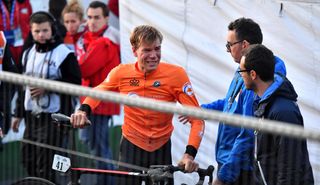 Dutch outlet NOS has reported that Nils Eekhoff will head to the Court of Arbitration for Sport (CAS) as he looks to challenge the decision that ended with his disqualification in the U23 men’s race at the Yorkshire World Championships. According to NOS Eekhoff has the support of the Dutch Cycling Federation.

Eekhoff crossed the line first in the U23 race in September and duly celebrated with his teammates and coaching staff at the line. However, after the race, a jury was asked to look back at video footage after the Dutch rider crashed with just under 130km to go and then used the slipstream of a team car to come back to the peloton.

Eekhoff was found guilty of violating rule 2.12.007 Art 4.7 of the UCI statute and given the maximum penalty of disqualification. Samuele Battistella (Italy) was handed the rainbow jersey as a result, while Eekhoff left the race in tears.

There was no opportunity for Eekhoff to appeal the UCI’s decision but within hours of the race and the jury’s decision the 21-year-old’s agent informed to Cyclingnews that legal action would be considered.

Dutch coach: The UCI wanted to make an example of Eekhoff

Eekhoff is on the books of Team Sunweb, but his management company, SEG, is one of the most prominent and respected athlete agencies in mainland Europe. In a message sent to Cyclingnews several hours after Eekhoff's expulsion, SEG said: "Together with Team Sunweb we'll research the situation and the legal options we've to defend Nils and make sure he gets the rainbow jersey that he deserves. Our legal department is currently studying the case."

According to NOS matters have now stepped up. "When I suddenly heard of disqualification, I burst into tears. I was not aware of any harm and I never thought I was playing with fire," Eekhoff is reported to have told NOS.

The rider’s position has been backed by his national federation (KNWU).

"The application of that rule must be different," said director Thorwald Veneberg. "Nils must also be clear why that decision was made at that time, because we do not have it at the moment."

"In this way, perhaps something good can come out of this situation. At least there should be a good look at those regulations and their application. And then we will see what the result will be."

Cyclingnews has reached out to both Team Sunweb and SEG Cycling for comment.

CAS has not officially announced when they will meet to discuss Eekhoff’s case.