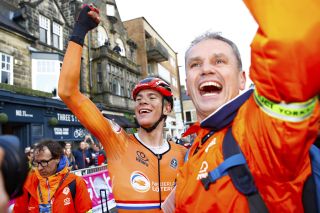 The Old Swan Hotel in Harrogate, just over 500m from the finish line of the UCI Road World Championships circuit, was a hive of activity on Friday evening as riders and staff came to terms with the disqualification of Nils Eekhoff’s U23 road race world title.

While Eekhoff was upstairs with his parents, Dutch federation officials came and went, a sense of disbelief in the air.

Adriaan Helmantel, the coach who was in the car behind which Eekhoff carried out the drafting that would cost him the title, stopped to speak to Cyclingnews in the lobby.

"The reaction is I'm pretty angry. We did a fantastic race. Nils did the race of his life. We saw a great race with a beautiful winner, and then the UCI takes this decision, 'for the sake of cycling', to get him out. That's hurting me," he said.

"If they follow their rules, they are right, but sometimes it's also good to look at your rules in the way of cycling, and they clearly didn't do that. It feels like they maybe wanted to make an example or something. It was not the ending this beautiful race deserved."

Eekhoff crashed and dislocated his shoulder with just under 130km remaining. After 'popping his shoulder back in' and grabbing a new bike, he settled in behind the team car and was paced back towards the cavalcade of cars behind the main bunch.

While the UCI eventually said Eekhoff had drafted for "tens of seconds", Helmantel told Cyclingnews it was in fact "a little over two minutes".

"It's true. I took him behind the car after the crash, but I did it in a decent way. I didn't put him by the car with the bottle – just behind. I brought him back to the caravan, then he made his own way back to the bunch."

Eekhoff and Helmantel both claim they had no idea they were doing anything wrong at the time. Even when the UCI delayed the podium ceremony, they assumed they were looking into a photo finish for bronze. Drafting is not permitted by the letter of the law but is an everyday occurrence as riders look to rejoin the bunch after crashes or mechanicals. There seems to be a grey area as to how much drafting constitutes an infraction.

"I don't know what is too long. I don't even know the rules. What I understood – which is now totally false – is that after such an incident you can bring your rider back to the caravan, then he has to move up himself," Helmantel said. "But clearly that's not allowed. If he was riding behind another team car, maybe there is no problem, but now there is a problem."

Asked if he felt it was unfair, he said: "If the rule is the rule, then they should take him out, but I'm not at that point yet that I can accept it, so at this moment I say it's unfair."

Helmantel also complained of double standards, revealing that he had learned Great Britain's Tom Pidcock, who finished fourth but was awarded the bronze medal after Eekhoff's disqualification, had done something similar.

"I was really furious at the decision, but I calmed down and went again to the jury, because I got information that [Tom] Pidcock [3rd place] was also riding behind a car after a crash. I don't want to flick Pidcock, because that feels really bad, but if Nils is taken out, is that now also the case [that Pidcock should be disqualified]?

"I also asked why they didn't take him out straight away, because he had a big influence on the race. If you have a commissaire in the van looking at the live images, you can say 'ok, you have a rider behind the car for two minutes – take him out'.

"If he was second, I guess it was no problem, but then becomes world champion, so they look at the images and take him out."

Helmantel's emotions were clearly running high, and on a couple of occasions he had to stop himself saying things he thought he might later regret. His final word was a nod to the precedent he feels the UCI have now imposed on themselves, most immediately for this weekend's elite road races.

"Every time now that a rider is behind a car, they have to take action," he said. "Let's see what happens on Sunday."