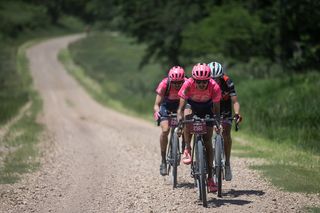 The organisers of Dirty Kanza announced Tuesday that they have cancelled the event due to health concerns surrounding the COVID-19 coronavirus pandemic. Life Time had initially attempted to postpone the event from May to September, but after considering input from community leaders and reviewing the latest scientific data trends, it has decided to cancel the event altogether and return in 2021.

"Our team has worked hard for many weeks to determine if an event could take place in Emporia this Fall and we have been in regular communication with local community and health leaders to determine our best path forward,” said Lelan Dains, the event’s race director at Life Time.

"While we hoped that something could be done, if even with an altered capacity, we now realize the safest and most responsible thing to do for our athletes, volunteers, and community is cancel the 2020 event."

Coronavirus: Dirty Kanza postponed from May 30 to September 12

Life Time is offering the 4,000 registered athletes their choice of four options that include a complimentary deferral into either the 2021 or 2022 events, a donation of original entry fee to the Life Time Foundation, or a full refund. Participants have been requested to select their choice by August 7, according to its press release.

"The decision to cancel an event is never an easy one, and I appreciate the thought and work that Life Time has put into planning the 2020 race," said Danny Giefer, Mayor City of Emporia in the press release. "While we are all disappointed the event can't occur as planned, we can look forward to 2021 and a continued long-term relationship hosting the world's premier gravel cycling race right here in Emporia."

Life Time has also reiterated its promise to return in 2021 with a new event name that will replace the current name Dirty Kanza, due to its racial insensitivity to the Kaw Nation indigenous tribe based in Oklahoma and Kansas.

In June, Life Time announced that it was considering a name change for the event following the dismissal of race founder Jim Cummins from the organisation over a social media post in which he claimed the shooting of Rayshard Brooks by police in Atlanta was "justified."

In a statement at that time, Life Time said it had launched a 'Diversity and Inclusion Council' and that it had been working throughout this year on options for a name change.

"The DK team at Life Time is looking ahead with both reflection of the past and excitement for the future," read the press release concerning the return of the event in 2021.

"With a promised new name, fresh look and a continued focus on growing the sport, the 2021 event is promised to be a first-of-its-kind experience for athletes, volunteers and community members. In addition to the rebrand, which is set to roll out over the coming months, Life Time is in the process of creating an event industry-focused diversity, equity and inclusion coalition."