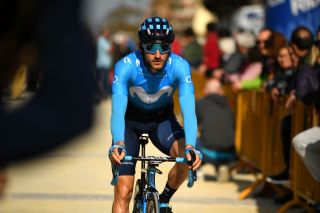 Dimension Data have announced the signing of versatile Spaniard Carlos Barbero. He joins the team, which will rebrand to Team NTT next season, after spending three years at Movistar.

Barbero has taken nine wins since stepping up from Caja Rural-Seguros RGA to Movistar in 2017. The 28-year-old's palmarès includes two stages apiece at Spanish stage races Vuelta a Castilla y León, Vuelta a Burgos and Vuelta a Madrid.

In 2017 Barbero won the Volta ao Alentejo and Circuito de Getxo, while this season has brought a sole victory at the Tour of Austria, also finishing third at the Vuelta a Madrid and top 10 at Kuurne-Brussels-Kuurne.

"I am very happy and excited to be part of the team since I have been in Spanish teams for all my career," said Barbero in a team press release. "So, it’s a new challenge for me to be part of a foreign team. This motivates me a lot and I think that my riding style suits the team.

"My ambitions are to show consistency during the whole year, and I am very motivated to focus on the Classics calendar, but above everything, that the team is happy with my work at the end of the year."

As well as bringing in some Classics strength, it's hoped that Barbero's sprint will bring additional wins to a team that lies bottom of the win rankings for WorldTour teams in 2019, with just seven so far.

"I intend to bring stage wins for the team when I have the opportunity, and also to help my colleagues to achieve victory. The important thing is that the team adds stage wins," he said.

Team principal Doug Ryder added: "Carlos joining us is really exciting. He’ll not only bring a different set of skills to our team but also bolster what we already have in our current Classics environment.

"His experience speaks for itself and his versatility will be of huge benefit. He’s been with Spanish teams his whole career so to have him bring that experience into our group is also going to be of great benefit."

Barbero joins Belgian time trialist Victor Campenaerts and Italian neo-pros Samuele Battistella and Matteo Sobrero as new signings at Team NTT next season. Mark Renshaw and Lars Bak will retire, while a number of other riders, including Mark Cavendish, are expected to leave for pastures new as the team undergoes a shake-up for 2020.