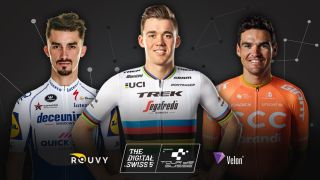 In all, 19 teams will participate in the five races over five days starting on Wednesday, April 22. Organised by Velon and the Tour de Suisse along with Rouvy, the indoor platform riders will be using, the races will feature three riders from each team, with teams given the ability to change their line-ups from day to day.

"It is a new type of race for me, very different to anything I have done before, but I know the set-up will be really good and it is great that we are able to race during this difficult time and have something where we can focus and test our condition," said Alaphilippe. "I hope that the fans will enjoy watching what will be some tough days of racing."

The Rouvy platform uses real video footage, and riders are represented by an avatar, dressed in their team kit. The race routes are a mixture of flat, hilly and mountain profiles and are taken from the parcours of the Tour de Suisse.

Van Avermaet has become a fan of virtual racing after winning the virtual Tour of Flanders earlier this month.

"Virtual racing is definitely not easy," the Olympic champion said. "The races may be much shorter than normal races, but the effort is much more intense and you have a much smaller window of opportunity to make the difference when it comes to tactics.

"I’m happy we are giving fans something to watch while we are not racing on the road," Van Avermaet said. "I think it’s important for everyone. As well as giving fans entertainment, it gives the riders some motivation and it is a chance for the teams to show their sponsors. We’re in for some tough races next week, so I'll give it everything I have to get another virtual win under my belt."

Boasson Hagen said his entire NTT Pro Cycling team is excited about the chance to race virtually, a first for the 32-year-old Norwegian.

"It’s nice to have a goal to aim for during this period in time where we can’t race on the road," he said. "I have spent a lot of time riding on the trainer at home in training, but to race on it will be a first. I think it will be exciting viewing for all the fans. It’s great for our sponsors and for us riders. I think it will be very very hard racing, so it should be fun.”

Although this hasn't turned out to be the championship season in the rainbow stripes that Pedersen had envisioned after winning the World's road race in Yorkshire last September, he'll get a chance to race in his jersey next week, even if it's from the comfort of his own living room.

"Normally, I don’t like to spend time on my home trainer, but right now I actually enjoy it, especially with the races coming up," he said. "It’s really nice that we can compete against each other and find a different solution in this difficult situation everyone is in. I think it’s great that we can race against each other while keeping our distance, so I’m really looking forward to doing some hard racing and getting the heart rate up again."