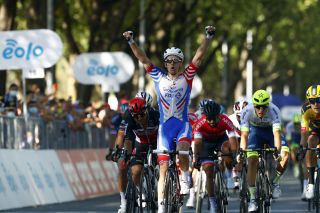 The truncated build-up to this novel edition of Milan-San Remo means that few riders have much of a form line, but Arnaud Démare’s midweek triumph at Milano-Torino underscored his credentials as a contender for victory on the Via Roma.

The Frenchman, of course, already has a pedigree in La Classicissima to match his current condition. He won the race in 2016 and placed on the podium two years later, each time giving the impression that his usual speed had scarcely been blunted by the race’s sheer distance.

Still, Démare can only have been heartened by the way he dispatched of Caleb Ewan, Wout van Aert and Peter Sagan at Milano-Torino, and by how his Groupama-FDJ squad teed up the bunch sprint in Stupinigi.

Groupama-FDJ coach Julien Pinot: This season will be intense

“I’ve felt this strong before editions of Milan-San Remo in the past but never this well supported,” Démare told reporters – both in situ and via Zoom – from the courtyard of his hotel in Paderno Dugnano, Italy on Friday afternoon.

“I can count on my teammates even more than normal. They’re all at their very top level. We were together at a training camp at Le Grand-Bornand for three weeks and I could already see there that we had all come out of the lockdown in good shape. Then I saw it again at the Vuelta a Burgos even if we had bad luck in the last sprint.”

Démare took two second-place finishes at Vuelta a Burgos just a week ago, enduring particular frustration on the penultimate day, when he was forced to a virtual halt by a crash beneath the flamme rouge. The five days in Spain was time well spent, not least because it offered a chance to adjust to the soaring temperatures anticipated for this weekend’s rescheduled Milan-San Remo.

“We were lucky to have that heat in Burgos for five days, and that will have allowed us to acclimatise because we were racing at up to 40°C,” Démare said. “The riders who did Strade Bianche had that kind of heat too, and that will have done them good ahead of Milan-San Remo. Four hours in that heat is already tough, but you really have to manage it well over seven hours.”

Those seven hours are distilled into a breathless final 30 minutes or so over the Cipressa and Poggio, where riders are compelled to make decisions instantaneously and where mistakes are usually irredeemable. Despite the alterations to the route, Démare will face a familiar conundrum when the race hits the Ligurian coast – twist or stick.

“You have to be wary of everybody, but I’m more worried by the puncheurs than the sprinters,” Démare said. “There are some riders who could really explode the race and then you have to decide whether to follow them or to wait. That’s something you have to do in the moment, based on the composition of the peloton.

“If it all blows up on the Poggio, the race is lost, so you have to follow if two or three riders go away. But you have to decide that in the moment, you can’t plan too much in advance.”

The Frenchman cited Julian Alaphilippe, Philippe Gilbert and Vincenzo Nibali as possible danger men over the Poggio but, like many, he views Strade Bianche winner Wout van Aert as the leading contender for Milan-San Remo, given his ability to win in a variety of scenarios.

“He (van Aert) can win alone and he can sprint, so he will be the favourite, that’s clear,” Démare said.

The lie of the land has changed considerably since Milan-San Remo was originally postponed in March. As well as the summer heat, competitors at La Classicissima must cope with reduced team rosters and a redesigned route.

Démare’s teammate Jacopo Guarnieri expressed regret that mayors of towns on the Ligurian coast had refused to grant passage to Milan-San Remo, forcing RCS Sport to make a late overhaul of the parcours in order to reroute the gruppo through the Langhe before hitting the Riviera just before the Cipressa.

“It’s a pity that these municipalities didn’t see cycling as a plus for the region, they saw us as a problem,” Guarnieri said. “I’m very disappointed with the decision at a political level. On paper, it makes for a more demanding course but it’s hard to say if it will be a harder race.”

Démare, for his part, does not expect the absence of the Turchino to alter the list of contenders, though he noted that the scramble for positions on the Colle di Nava could be rather more fraught. “From a strategic point of view, positioning will be important there. But it will be after 250km, so it should be easier to place yourself if you have the legs.”

Within minutes of Démare’s victory at Milano-Torino on Wednesday, news reached Stupinigi of the horrific crash on stage 1 of the Tour de Pologne that left Fabio Jakobsen with severe injuries. The Frenchman has reviewed the images of the sprint and he found fault both with the manoeuvre of Dylan Groenewegen and the lay-out of the barriers in the finishing straight in Katowice.

“There are a lot of things to call into question, whether it’s the rider or the barriers,” said Démare, who compared the incident with Mark Cavendish’s crash on the day he won on the 2017 Tour de France in Vittel.

“When Cavendish crashed, the barriers didn’t move and he slid back onto the road instead of going through them. A rider should never go off the road because there are too many obstacles that could be fatal.

“We have to be more vigilant about the approach to sprints, but also about the infrastructure around them.”