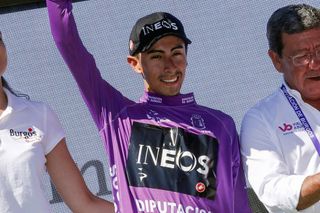 The Vuelta a Burgos is the first big international race on the revised cycling calendar published by the UCI earlier this week, but it remains uncertain whether the event will proceed as scheduled from July 28 to August 1 due to the restrictions in place to prevent the spread of COVID-19.

Spain’s state of emergency has been renewed five times, and the current lockdown restrictions remain in place until at least June 6.

In a video press conference, the vice-president of the provincial council of Burgos said that a decision on holding the Vuelta a Burgos would be announced next Tuesday.

“We are going to meet to make a decision on the Vuelta a Burgos,” Lorenzo Rodríguez said, according to the Zikloland website. “We will analyse the pros and the cons, and then decide accordingly. It will not be easy.”

A report in Burgos Noticias has suggested that the race is unlikely to go ahead, citing concerns from local politicians at allocating resources to a sporting event amid a public health crisis, though any official announcement will not come until Tuesday.

With the Tour de France rescheduled for August 29-September 20, the Vuelta a Burgos marks the beginning of the build-up to La Grande Boucle. And, with WorldTour racing only scheduled to resume on August 1 at Strade Bianche, it could serve as something of a test case for the feasibility of fulfilling the UCI’s rearranged calendar.

Last year’s edition was won by Ivan Sosa (Ineos) and an even deeper field is anticipated if the race does eventually go ahead this year.

El Mundo compared the Vuelta a Burgos to the first Bundesliga game played behind closed doors when European football made a tentative return last weekend: “The Vuelta a Burgos will be the Borussia Dortmund-Schalke 04 of cycling.”