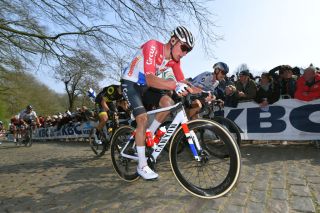 Four-time Paris-Roubaix winner Roger De Vlaeminck has named Mathieu van der Poel as the heir to his crown of the title of 'Monsieur Roubaix', suggesting the cyclo-cross world champion and Classics contender can better his haul of four Paris-Roubaix victories, with Wout van Aert likely to be his biggest rivals in the yeas ahead.

De Vlaeminck rode Paris–Roubaix 14 times during his hugely successful career, winning Roubaix in 1972, 1974, 1975 and 1977, and finishing second four times, third once, fifth once, sixth once, and seventh twice. He abandoned only once, in 1980.

Only Tom Boonen has also won four editions of Paris-Roubaix, while De Vlaeminck is one of only three riders to have won all five of cycling's so-called Monuments.

Van der Poel has yet to make his debut at Paris-Roubaix, but De Vlaeminck is convinced of his ability in the most physically demanding race of the season.

Van der Poel: What are we training for in the next few weeks?

Van der Poel: A four-year plan for the Tokyo Games is ruined

"He will win Paris-Roubaix at least three or four times and maybe five times, and I sincerely hope he does it," De Vlaeminck said in an interview with Sporza as the COVID-19 pandemic meant this year's Paris-Roubaix has been postponed.

"He can do anything. He speaks well, trains well and takes care of himself. He has class and he's my favorite for all the races. He is a bit like me, he's versatile. I'd like to see him ride a time trial against the big riders again, so I can really get a full idea about his ability," De Vlaeminck said.

"Wout van Aert will also win three or more editions of Roubaix. I hope I can experience Van der Poel's win. He is also the only rider who can win all five Monuments just like me."

De Vlaeminck was also an amateur and professional cyclo-cross world champion, following in the footstep of his older brother Erik. His is convinced his cyclo-cross skills helped him perform in Paris-Roubaix, while he completed 400km training rides to prepare for the Classics.

"After a 250km race, I was able to attack 20 times; I trained very hard for that," De Vlaeminck said.