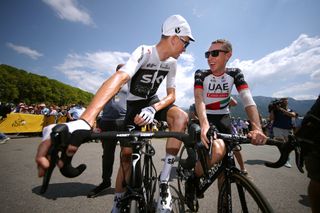 Froome and Martin at the 2018 Tour (Image credit: Getty Images)

Dan Martin has welcomed the future arrival of Chris Froome at Israel Start-Up Nation, insisting that it broadens rather than limits his horizons. Speaking to Cyclingnews, the Irishman also revealed he will forgo any general classification ambitions at this year’s Tour de France in order to focus on stage wins.

Martin, two-time Monument winner and three-time top-10 finisher at the Tour, joined Israel Start-Up Nation this year as a leader for the team’s debut season in the WorldTour.

Next season, he will be joined by four-time Tour winner Froome, whose transfer from Team Ineos was announced a fortnight ago.

Dan Martin on coronavirus: Take a reality check and stay inside

Demol: Everybody has a 'wow feeling' about Chris Froome transfer

"Chris contacted me before he made the decision and asked me how the team was. We've known each other a long time – we first raced together in 2006 back in the amateurs – and we've always communicated in the peloton," Martin told Cyclingnews.

"If I look at the races we've won, and how, we're quite different riders with very different styles, and it's something that can complement each other. It's only a positive for me, Chris coming to the team. It's someone to play off in the mountains. I think we'll go together really well."

While Martin is known for his restless, aggressive style of racing, Froome's Tour de France success has largely come through measured control from a strong Sky/Ineos team. Indeed, Martin's frantic attempts to disrupt that Sky mountain train netted him the combativity award at the 2018 Tour.

Froome is expected to ask for reinforcements to the Israel roster, but Martin doesn't expect the Sky blueprint to simply be transferred across.

"There are so many different mountain trains now, with Ineos and with Jumbo-Visma, and it's difficult to replicate that. You're not going to beat it by doing the same thing," Martin said.

"Chris obviously understands how Ineos work so hopefully he knows how to beat them, and hopefully he tells me before this year's Tour."

That said, Martin felt that talk of Froome needing multiple signings to ensure adequate support did a disservice to the current crop of Israel Start-Up Nation riders.

"People were underestimating us this season, and we were already creating some surprises and were definitely punching above our weight. Our weight just got heavier, but we can push on and deliver.

"Obviously our roster doesn't have the experience of working for someone Chris but I'm confident from what I've seen since I’ve been here – even just the atmosphere in the team, that we can step up."

Stage hunting at the Tour

While Froome's arrival would seem to limit Martin's scope to improve on his Tour de France top 10s and crack the top five or even the podium – as he's felt capable of in the past – doing that isn't at the top of his career ambitions anymore.

Martin – and by extension Israel Start-Up Nation – will not challenge for GC at this year's rescheduled Tour, preferring instead to target stage wins.

"I've got an open mind – I won't lose time on purpose – but I'm not focused on it. The number one goal is to win a stage, and that's the team's goal, as well. Being the first Israeli team on the start line, to win a stage would be massive, and that's one of my strengths," he said.

"Going for GC restricts you in that respect. The amount of resources a true GC tilt takes up... and it's frustrating for a rider like me to have to temper my aggression, and having to think about not losing time every day. I'm excited to race without that burden."

Martin recognised the irony in the fact that, of all the Tours he'll have raced, the 2020 edition, with its proliferation of climbing and sole time trial – part of which is up a mountain – is "probably the route that's been best suited to me".

The decision to target stages, he said, was "50-50, mutual" between himself and the team, and can be further explained by the density of a redrawn season that packs nearly a whole calendar into three-and-a-half months.

A week after the Tour, Martin will ride the World Championships, followed by La Flèche Wallonne and Liège-Bastogne-Liège the following week. After the Ardennes Classics he'll have a break before heading to the Vuelta a España in late October, where he may well mount a bid for the overall.

"I'm potentially more suited to a GC at Vuelta," he said of a shortened 18-stage Spanish Grand Tour that features its now-usual dose of punchy uphill finales. "That was in our minds, keeping something back by doing stages at the Tour, but it's a long way off."

Either way, Martin appears refreshed after a lockdown period he "strangely enjoyed", and genuinely enthusiastic about the team that, even seven months into the year, is still sort of new to him.

"I'm completely relaxed. I'm just looking to enjoy my racing – that's why I came here. When I'm enjoying my racing is when I tend to get good results," he said.

"I kind of realised I've achieved a lot in the sport, so I'm just out to enjoy it."