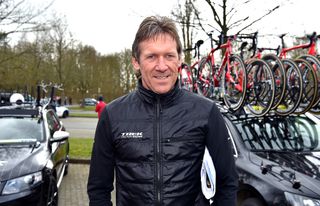 Israel Start-Up Nation's Classics team are currently hard at work in Belgium testing the routes of the northern Classics ahead of the season restart, with Nils Politt and André Greipel to lead the line for them this autumn. However, the biggest news surrounding the team in recent week has been the upcoming signing of Chris Froome.

The Briton will join from Team Ineos for the 2021 season, the team announced earlier this month. Team directeurs sportifs Dirk Demol and Erik Van Lancker took time out of training camp to discuss the big move.

Speaking to Het Nieuwsblad, Van Lancker said that Froome's presence will take the whole team a higher level, with Demol adding that a big leader like the 35-year-old always gives his teammates a boost.

"We're not talking about Froome all the time. Everybody has a 'wow feeling', of course. There'll be a real big champion here soon," Demol said.

"He will lift the team to a higher level. On the surface of course, but I think that other riders will perform better because of his presence, too," added Van Lancker.

"That's what leaders of that calibre do," continued Demol. "I've worked with Armstrong, Contador and Cancellara. Men like that give everyone a 'boost' by their performance but also by their personality. That will be no different with Froome."

The duo are currently in Anzegem, in between Oudenaarde, Wevelgem and the French border, a perfect spot to recon the routes of the Tour of Fladers, Gent-Wevelgem and Paris-Roubaix.

A man who has won the latter two of those races, CCC rider Greg Van Avermaet, has been linked with the team for 2021, with team co-owner Sylvan Adams last week admitting interest in the Belgian. Demol and Van Lancker said that they would welcome his addition to the squad, should a transfer come to pass.

"In the first instance, the team will now be built around Froome. But you can always use a rider like Greg," said Van Lancker.

"We are very happy with Froome's arrival, but you can never have too many top riders. Van Avermaet is, and remains, a top rider," added Demol.

In a peloton featuring Deceuninck-QuickStep, the team as currently constructed isn't the top favourite for the rescheduled spring Classics, though they have a strong core, including 2019 Paris-Roubaix runner-up Nils Politt, Greipel and Le Samyn winner Hugo Hofstetter.

"We're not a top team, but we're definitely going to show ourselves," said Demol. "Last year Nils was also sixth in E3 Harelbeke and fifth in Flanders. With Greipel and Rick Zabel he gets two men next to him with whom he always trains in Germany. I think that trio will be very strong.

Van Lancker said that, while this year's Classics are important targets for the team, the planning would also have to account for 2021 too. Riders are set to return to racing in January and February, just three months after the 2020 edition of Paris-Roubaix, and next year's Classics season coming just six months after this one.

"The programmes of the Classics riders are quite a puzzle," he said. "The races are only in October, so the challenge is to have them fresh there. "At the same time, you also have to think about the 2021 season. A Classics rider who rides the Tour Down Under hasn't had a rest this winter. He'll be back in February and that can never be the intention.

"Dirk and I really believe in our Classics team. If they didn't, we wouldn't have organised this training camp."