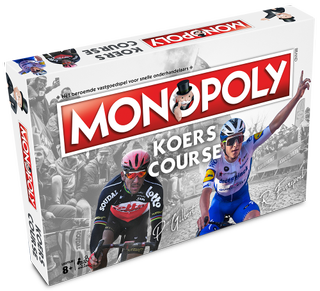 A cycling version of the popular Monopoly board game has been launched in Belgium, with the famous climbs of the spring Classics replacing the most valuable streets on the world famous square board.

Monopoly Koers Course will be released in a limited edition of just 2000 at a cost of 50 Euro, and is scheduled to go on sale in November. The game will be in both French and Dutch, with the 22 stops on the square board such as Park Lane, Old Kent Road, Boardwalk and Kentucky Avenue replaced with the Muur van Geraardsbergen Flemish climb and the Carrefour de l’Arbre section of Paris-Roubaix.

A online poll will decide the most expensive location on the board, with the voters asked to choose between the Koppenberg, the Muur, the Roubaix velodrome, the Paterberg, the Cauberg, the Côte de la Redoute, Oude Kwaremont and the Poggio from Milan- San Remo. Voting is open until May 29 on the www.monopolykoers.be website.

"This Monopoly edition takes you to all the beauty that the spring races have to offer," the creators of Belgian Monopoly claim on their website.

"Just think of legendary duels on the La Redoute, the marches on the Muur or that one flat tyre at Carrefour de l'Arbre. Visit the Kwaremont, go for a spin on the velodrome of Roubaix, climb the Poggio and get a profit bonus!"

Philippe Gilbert and Remco Evenepoel are on the cover of the box and helped promote the board game via video link at the official launch at the Sven Nys Cycling Center on Balenberg.

"On the super nice box we're riding over the Muur, a historic place in the racing world and one of my favorite climbs but I still opt for the Cauberg, which has given me a lot of success in the Amstel Gold Race and of course the 2012 World Championships," Gilbert said when selecting his favourite climb.

Evenepoel opted for the La Redoute from the finale of Liège-Bastogne-Liège.

"It was difficult to choose but in the end I chose one from the Ardennes, where I love to go both during training and to race," Evenepoel said.

"Together with the Stockeu, La Redoute is one of the crown jewels of my favorite classic: Liège-Bastogne-Liège. Unfortunately I will not be able to test my legs and show myself this season. But I hope to do it there often in the future."

Monopoly Koers Course can be ordered via the www.monopolykoers.be website.