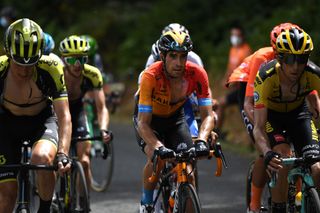 Bahrain McLaren will put all their backing behind Spain's Mikel Landa for the Critérium du Dauphiné, which starts on Wednesday, as the 30-year-old looks to continue to improve his form less than three weeks out from the start of the Tour de France.

Landa last raced at Spanish one-day race the Circuito de Getxo-Memorial Hermanos Otxoa last week, finishing well off the pace in 71st place, although it came just the day after he finished second overall behind Remco Evenepoel (Deceuninck-QuickStep) at the Vuelta a Burgos, where Landa also proved his good form with three top-five finishes out of five stages.

"After taking second place overall at the Vuelta a Burgos, I believe that I'll be in even better, and very good, shape for the Critérium du Dauphiné," Landa said in a team press release on Sunday. "The hard climbs in the French Alps are always very challenging for me. I’m looking forward to racing there, and giving it my best, and keeping my good feeling for racing going."

Bahrain McLaren directeur sportif Gorazd Štangelj added: "All our riders at the Dauphiné are there for Mikel, and each one of them will have an important role for to play.

Mikel Landa: I'm more confident of my form after Burgos

Matej Mohorič and Sonny Colbrelli are there to always make sure that Mikel's always in a safe place, while Damiano Caruso will be Mikel's last man on the climbs, and our road captain," he said.

"Pello Bilbao and Rafa Valls will take on 'mountain-engine' roles for Mikel, and Dylan Teuns will be there for the mountains and as a 'team anchor' for positioning."

Landa lines up in Clermont Ferrand, France, for the five-day Dauphiné [August 12-16] against the top Tour de France favourites from Team Ineos and Jumbo-Visma – Egan Bernal, Chris Froome and Geraint Thomas, and Primoz Roglic, Steven Kruijswijk and Tom Dumoulin, respectively – who went head-to-head at the past week's Tour de l'Ain, where Roglic came out on top at the weekend.