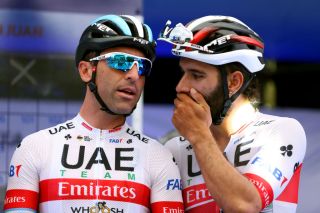 Almost a month after the UAE Tour was cancelled due to the Covid-19 coronavirus outbreak, eight people remain quarantined in an Abu Dhabi hospital, including UAE Team Emirates riders Fernando Gaviria and Max Richeze.

L’Équipe reports that two staff members from the UAE Team Emirates are also in quarantine, along with four representatives of Gazprom-Rusvelo: Dmitry Strakhov and an unnamed rider, as well as two staff members.

The UAE Tour was cancelled with two stages remaining due to suspected cases of Covid-19 on the race, and all riders, support staff, race organisation and media were placed in isolation in their Abu Dhabi hotels pending testing.

Two days later, 18 of the 22 competing teams were permitted to leave the United Arab Emirates, but Gazprom-Rusvelo, Cofidis and Groupama-FDJ remained in lockdown, while UAE Team Emirates announced that it was remaining in voluntary quarantine in the country.

Cofidis and Groupama-FDJ were given the green light to leave on March 8, while the bulk of UAE Team Emirates and Gazprom-Rusvelo’s riders and staff have also since returned home.

Gaviria and Richeze took to social media to announce their positive tests for coronavirus on March 12 and 13, respectively, while Strakhov also revealed his diagnosis on social media.

“He is fine and that reassures us,” Adrian Richeze said. “At first, it was very hard because little was known about the subject. He is fed up with the situation, but he knows that the only way to heal definitively is to fulfill this period of tests where he is hospitalized.”

Adrian Richeze added that his brother was more concerned about the situation in Italy, as his wife and daughter are based in Bassano del Grappa in the northeast of Italy. The nearby Lombardy region has the become the epicentre of the pandemic and the entire country is in a state of lockdown to limit the spread of the coronavirus.

In an interview with Colombian radio station Caracol Radio, he described Gaviria’s condition as “very positive, he is really well, he is in a perfect state of health” and said that the sprinter would leave the UAE in the coming days.