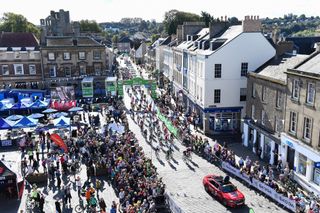 The Tour of Britain passes through a town in 2019 (Image credit: Bettini Photos)

British Cycling has extended the current suspension of cycling events and races in the country to June 30. The United Kingdom government placed the country in a state of lockdown Monday night in response to the Covid-19 coronavirus pandemic.

Last week, British Cycling suspended all events, ranging from races to sportives and festivals, until April 30. As of Monday night, the country had reported 6,650 positive coronavirus cases and 336 deaths.

"Given the ongoing uncertainty around the Coronavirus/Covid-19 outbreak, and the developing Government advice and guidance, British Cycling has taken the decision to extend its current suspension on sanctioned cycling activities to 30 June," read a statement from the organisation.

British Cycling suspends all events until at least April 30

Commentary: Why it's better not to ride together in the time of coronavirus

"With all Government guidance pointing towards a period during which the nation is being urged to come together to fight the spread of the virus, and the unprecedented burden currently on our emergency and public services, we felt that this is the most responsible – and only – course of action we could take at this moment.

"We are acutely aware of the impact that this situation has had on individuals, communities and businesses within cycling and beyond. We’d like to take this opportunity to reinforce that, while we share in the disappointment of those affected by this extended suspension, we will do absolutely everything within our power to ensure that cycling can return with strength and as soon as possible."

The statement also advises that cyclists should only go out once per day alone, or with housemates, following new guidelines issued by the government.

The Tour de Yorkshire, set to run through early May, had already been cancelled, while the new suspension means that the British National Championships, usually run in late June, will also be cancelled.

May's Lincoln Grand Prix and Tour of the Reservoir, and June's Lancaster Grand Prix are among the major British Cycling-sanctioned races set to be affected by the new suspension.

Major races in Europe, Asia, the Americas and Africa have been cancelled in response to the pandemic and various governmental decrees. The men's and women's WorldTour calendars are, as of Tuesday morning, empty until the end of May. The Critérium du Dauphiné and Trofeo Alfredo Binda (moved to its new date of June 2) provisionally remain on the calendar.