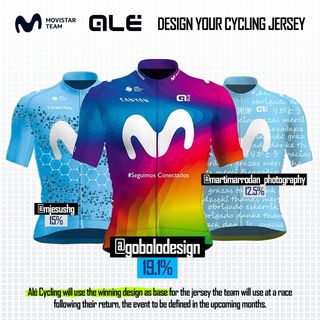 Movistar have unveiled the winner of their competition to design a one-off jersey to help raise money for the Spanish Red Cross and Italy’s Protezione Civile (Image credit: Movistar Team)

The winning design of a competition run by Spanish WorldTour team Movistar has been unveiled, and the colourful jersey will now be manufactured by the team's kit supplier, Alé Cycling, and worn by the team at one of this season's races when competition hopefully recommences later this year. Signed jerseys will also be offered to the Spanish Red Cross and Italy's Protezione Civile – the Italian Civil Protection Department – in order to be auctioned to raise funds for the fight against the coronavirus pandemic.

'GoboloDesign' was the winner with their 'rainbow' design, featuring a prominent 'Movistar blue' section, garnering a decisive 19.1% of the vote, winning ahead of two bluer designs. The team said that almost 400 designs were submitted for consideration, with the best 10 then going head-to-head in a final that saw more than 3,000 people vote for their favourites.

UCI rules allow teams to use a jersey design that isn't their standard design in one event per season, and teams often choose the Tour de France to showcase limited-edition-coloured or specially designed jerseys.

The custom-painted bike was used by Valverde at a number of races during the 2019 season, including the Tour de France, the Tour of Flanders and the Vuelta a España, and you can donate to the Spanish Red Cross to try to reach the team's €25,000 goal here, which had already reached €9,000 by Tuesday evening.