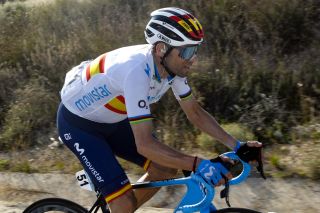 Spanish road race champion Alejandro Valverde (Movistar) got 15 days of racing under his belt during the 2020 season ahead of the coronavirus shutdown (Image credit: Bettini Photo)

When it comes to a revised race programme, if and when competition resumes on the back of cycling's shutdown due to the coronavirus pandemic, Movistar's Alejandro Valverde has told the Spanish press that he's likely to ride the Tour de France, the World Championships and the Vuelta a España – although he'd like to see the Grand Tours reduced from three weeks to two.

"This has been such an unusual year that I don't think there's much point in keep the Grand Tours as three weeks long because they're going to take place so late in the season," Valverde told Spanish newspaper Marca on Monday. "Fifteen days of competition for each of them would be more than enough for the riders and to keep the fans happy.

"It's normal that the Tour should come first, followed – speaking as a Spanish rider – by the Vuelta and then the Giro d'Italia. They've decided something else," he said, referring to the revised dates for the Tour of August 29-September 20, and the rumoured dates of October 3-25 for the Giro and the Vuelta running for three weeks from November 1, "and you have to accept it, but I would cut down the length of the three races and put some of the one-day Classics in between them.

Alejandro Valverde: I doubt we'll be racing again this year

"It's not a bad date," Valverde said of the Worlds, which is one competition that has remained in its original dates of September 20-27. "You'll have to recover well from the Tour, though. With only one week between the end of the Tour and the men's Worlds road race [on September 27], you have to try to come out of the Tour fit but fresh."

Valverde – who said earlier this month that he wasn't convinced that there would be any more racing in 2020 – added that riders would normally need around two months to prepare for a Grand Tour.

"Everyone's been training at home, but I don't know what it's going to be like for me when I get out on the road again, and don't really know how long it will take me to be in great shape for the Tour," he admitted, with Spain having joined the likes of France and Italy in not allowing riders to train outside.

Valverde's big goal this season had been the 2020 Olympic Games road race, which would have taken place on July 25, but with the Games now postponed until summer 2021, the Spanish veteran will be another year older, and that much closer to retirement.

"Of course, nothing much changes between the ages of 25 and 26, but going from being 40 to 41 is a bit different," he told Marca.com. "But we've still been training hard during this period without competition, so the idea is to do the Games in 2021 and to hope that my body responds in the way that I want."

Asked whether he'll consider extending his pro career for a year behind his proposed retirement at the end of 2021 due to the amount of racing lost so far this season, Valverde refused to set a definitive timeline.

"At the moment, we're going to see how this year ends and see how the next one begins," he said. "We know how difficult the situation is right now."

"It's been a year of many changes," Valverde said of the transfers in and out of his Movistar team during the off-season, with the likes of Nairo Quintana, Mikel Landa and Giro winner Richard Carapaz leaving, while 2018 Vuelta runner-up Enric Mas has arrived from Deceuninck-QuickStep.

"Some very experienced riders have left," he said, "and some young riders have arrived. But now everything has been stopped by the coronavirus, and we're still waiting to see when the season will start up again. But I'm sure our new riders are going to do well, and we'll have a strong team."

Much of how the dynamic worked at a team that juggled a number of big-name leaders can be seen in Netflix documentary The Least Expected Day, which follows the Spanish WorldTour squad's ups and downs during the 2019 racing season.

"I loved it, and I think that 90 per cent of people who watched it loved it, too. The idea was to keep recording [in 2020], but with this pandemic, everything stopped, and I don't know whether we're going to continue recording it," Valverde said.