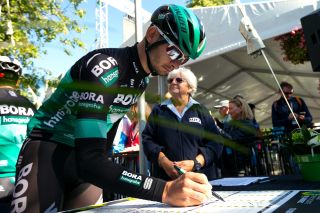 Jumbo-Visma have announced the signing of Christoph Pfingsten from Bora-Hansgrohe. The German is the fourth and final new arrival at the team ahead of the 2020 season.

“Team Jumbo-Visma is one of the best teams in the world. The past years, the team has grown bigger and it has become more professional. I’m very happy that the team wants me and that I get this opportunity,” Pfingsten said in a statement released on Wednesday.

Roglic extends contract with Jumbo-Visma till 2023

Groenewegen extends with Jumbo-Visma through 2023

Pfingsten has spent the past five seasons at Bora-Hansgrohe, where he completed the Vuelta a España in 2016 and 2017 before riding the Giro d’Italia in 2018. The 31-year-old has never won a race as a professional but has established himself as a reliable domestique across a variety of terrains. In the early part of his career, he rode for Dutch Continental outfit De Rijke.

“Besides the riders I know from the peloton, I know my compatriots Tony Martin and Paul Martens well,” Pfingsten said of his new team. “I also was teammates with Dylan Groenewegen at Cyclingteam De Rijke a few years ago.”

Pfingsten is the final rider to be added to Jumbo-Visma’s roster for the 2020 campaign. The marquee new signing is Tom Dumoulin, who joins from Sunweb, while youngsters Tobias Foss of Norway and Chris Harper of Australia will make the step up to WorldTour level with the team.

Jumbo-Visma will retain most of the roster that enjoyed such success in 2019, including Vuelta a España winner Primož Roglič and sprinter Dylan Groenewegen, both of whom extended their contracts to the end of 2023.

Sepp Kuss and Antwan Tolhoek are among seven other riders to extend their contracts, while key riders such as Tour de France podium finisher Steven Kruijswijk and Tour stage winners Mike Teunissen and Wout van Aert are already under contract for future seasons.

Outoging riders include Neilson Powless, who leaves the team for EF Education First, while Danny van Poppel has signed for Wanty-Groupe Gobert.