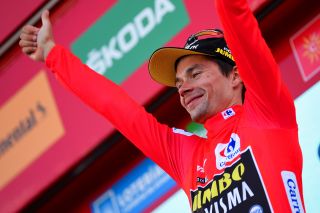 Jumbo-Visma have ended speculation about the future of Primož Roglič with the team, announcing via video that the Slovenian and current Vuelta a España leader has signed a new contract that runs until the end of 2023.

Tom Dumoulin's recent arrival via mid-season transfer from Team Sunweb had sparked suggestions that Roglič could also break his contract for 2020 and head elsewhere to secure team leadership at the 2020 Tour de France.

Vuelta a España: Roglic stays in control despite briefly being gapped

Roglič takes another big step towards Vuelta a España victory

Roglič has been linked to UAE Team Emirates, with other teams also interested if he became available.

Citing his talents for ski jumping and cycling, they all suggested Roglič might be tempted to change sports but Jumbo-Visma manager Richard Plugge's response to their telephone calls was to extend Roglič's contract.

Despite being race leader at the Vuelta a España, Roglič did not hold a press conference during the second rest day. He confirmed he will stay at Jumbo-Visma via a team announcement.

"I like the way this team works. I am enjoying being part of it," Roglič said. "It's all about collaboration. Together we can achieve great goals. As a cyclist, I entered this team as a relative beginner and I have developed with the help of the team. I received opportunities and support.

"It all went quickly. For me, but also for the team. We have now reached a nice level together and I really believe that we can achieve even more. I have won some races in recent years, but you always aim for more and for the highest.

"The most important argument for staying is that I get opportunities here. I like to win. I have that option within this team. So I didn't have to think about it for long. I feel at home here, so why not?"