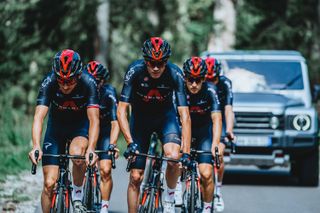 Chris Froome may not have been selected to compete at the upcoming Tour de France with his newly-named team Ineos Grenadiers but the seven-time Grand Tour winner says that there is something sentimental about competing at the Vuelta a España has his final race with the team before moving over to Isreal Start-Up Nation in 2021.

"It is a strange feeling but a sentimental feeling as well," Froome said during the official presentation of the Ineos Grenadiers kit at the Allianz Riviera Stadium in Nice Wednesday.

"The Vuelta a España was the race where I first really discovered myself as a Grand Tour contender nine years ago with this team, so to be doing it now, as my last race with Team Ineos, has a special feeling to it. It’s a race I’ve always enjoyed doing and it will be great to get stuck into a Grand Tour in that sense."

Froome and Thomas have both been members of the team since its inception as Sky Procycling in 2010. Thomas will instead race the Giro d'Italia from October 3-25 while Froome will lead the team at the Vuelta a España held from October 20-November 8. Froome won the Spanish Grand Tour in 2011 and 2017.

Froome joined Team Ineos at the early-season UAE Tour where he placed 71st overall. As a dress rehearsal for the Tour de France selection, he then competed at the La Route d'Occitanie where be placed 37th overall, and that was followed by the Tour de l'Ain where he finished 41st overall. His performances did not improve at the recent Critérium du Dauphiné where he placed 71st.

Following the announcement that Froome was not selected to Ineos' Tour de France team, he later confirmed that he was not confident that he could fulfill the necessary job at the French Grand Tour.

He acknowledged that moving his goals from the Tour de France to the Vuelta a España, was an adjustment but that he felt fortunate to be racing given the seriousness of his injuries, that included a fractured femur, sustained in a crash while previewing a time trial route at the 2019 Critérium du Dauphiné.

Froome said that the simple fact that he has begun racing again felt like a second chance in his lengthy sporting career.

"Luckily, from the moment I woke up in the ICU, the surgeon said to me, ’listen, you had some pretty serious injuries but you can recover from all the fractured bones, you can make a full recovery, so there’s no reason you can’t get back to that highest level’," Froome said.

"For me, that was all I needed to hear at that point. All the rehab started then and to be back racing now feels like I’ve been given a second chance."

Froome has not confirmed his race programme during September and October before he starts the Vuelta a España on October 20. The event has been reduced to 18 stages after the COVID-19 pandemic forced the cancellation of the planned start in the Netherlands. The Vuelta a España will mark Froome's final race with Ineos Grenadiers before he changes teams to Israel Start-up Nation in 2021.