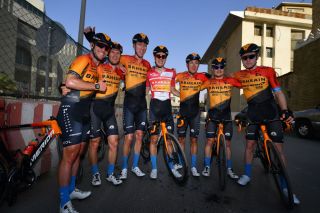 Andorra, the Alps, the Passo Pordoi in Italy and Freiburg in Germany will play host to five different training camps for Bahrain McLaren from late June onwards, with top names like Mark Cavendish and Mikel Landa among those honing their form at the camps for the upcoming, highly intensive, revised cycling season.

Cavendish will be training in Freiburg with a group including the other team sprinters and all-rounders, Bahrain McLaren's general manager Rod Ellingworth told Cyclingnews, while Landa will be part of the Andorra expedition.

Yet another two segments of the team will be at the Passo Pordoi, with each of the four training camps split into two as a way of helping maintain health measures.

"The sprinter-type guys are in Freiburg, Cav, [Heinrich] Haussler, [Marcel] Sieberg, [Phil] Bauhaus, that sort of gang," Ellingworth said. "They don't particularly need attitude, the roads round there are good, it's quite connected to Haussler and where he lives. Heinrich's been doing a great job, in terms of leading the group and being really pro-active, so hats off to him."

"As for Cav – like all of them – as soon as they get going and start racing it'll all be around the same time, and it's going to be very intense."

"We're using four different locations for five camps. One will be next week in the Alps, which is a recon camp and then we've got four in July. Andorra will be the slightly longer one for altitude, and then two in the Passo Pordoi, but in separate places, and another in Freiburg."

"They'll all be finished by July 25th" – just before the main body of cycling's revised season gets underway – "and depending on the workload of each group they'll be starting at slightly different times."

Although the UCI has not yet announced specific health regulations for training camps, or indeed races, Ellingworth said: "We're doing our own thing to try and protect the guys, with 'bubbles'.

"So we've got four different locations but eight different groups working together, so the guys into Andorra will be split into two groups, each one with a soigneur, mechanic and sports director and a coach. So each can be looked after totally on their own.

"It's just in case, because, apart from anything else, we don't know each race's separate medical requirements yet. We've got to prove that there are negative tests prior to that, of course, but you'll have to prove you were negative from so many weeks before - or whatever - and this way we can do that."

Ellingworth confirmed that tests on their riders have already been done, and will be repeated before the camps and throughout the camps and then - although this is subject to UCI confirmation - prior to each race itself.

The other reason for running small-size training camps, Ellingworth said, was that if the group was too big and a health emergency arose, then "it could take us out. So we're just doing our best to ensure that when we do go bike racing, everybody's in good fettle and ready to go.

"I know some teams are doing it as bigger groups and that's up to them. But that's what we believe, considering the uncertainty of medical requirements, as the way we should go."

Ellingworth confirmed that Bahrain McLaren's first race should be the five-day Vuelta a Burgos in Spain three days after the training camp ends, although he said that it was by no means straightforward getting into lower-category races given the packed schedule in this year's season and the high demand.

"The UCI has allowed a lot of organisers in the smaller races to reduce the number of riders from seven to six, to allow for extra teams to take part," he pointed out.

But even so, and by way of example, Burgos' organisers are already talking about 40 teams having applied for the race, when last year there were 18 teams on the start line.

Given the circumstances, and trying to think outside the box, non-WorldTour races that would not normally be on the team's program like the Tour of Portugal, Ellingworth said, were contemplated by Bahrain McLaren as part of their 2020 season, but the length of the Grandissima – as Portugal's 12-day top cycling event is nicknamed – made it impractical.

"It just takes out too many riders for too long a period of time when there's a couple of WorldTour races on," he said.

For all the WorldTour teams, with as many as three race programs running simultaneously at times, "it's going to be a challenge, particularly in terms of the pressure on staff rather than logistics. But as teams, we all want racing to go ahead and that's what we're aiming for."

And as for Bahrain McLaren specifically: "Our goals are twofold. To have all our riders racing, so we've got enough race programs to cover everybody, and to go full gas, hit it head on, be ready for this from the word go, staff and riders.

"So the objective is to come in in really good shape. We finished this [first block of racing] doing really well in Paris-Nice, with Dylan [Teuns] and we don't want to start any further back than that."