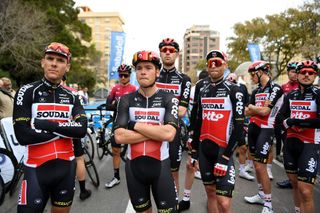 Numerous teams have announced their training camp plans ahead of the season restart in August, with Bora-Hansgrohe convening in the Austrian Alps, Astana splitting between the Sierra Nevada and the Dolomites, and Deceuninck-QuickStep meeting up in the Flemish Ardennes ahead of a camp in the Dolomites next month.

Lotto Soudal, however, will go their own way, avoiding altitude camps and full-team gatherings altogether. The Belgian squad will continue to work as they have previously been doing, with small groups gathering weekly in Flanders and Wallonia.

"We now have a group that trains on Tuesdays in the Flemish Ardennes and another on the Walloon hills on Fridays," team manager John Lelangue told Het Laatste Nieuws. "That will remain the case in the coming weeks.

"We'll avoid bringing a large group of riders and staff together. It's out of precaution. We decided to stick to what we decided in March, right after the COVID-19 lockdown.

"We have created small groups of riders, soigneurs, technical staff and a bus driver. The groups are in accordance with their race programs and we'll keep those 'bubbles' separate in the coming weeks."

The plan is for the whole team to be "working as usual" by the end of July, said Lelangue. In late March, riders and staff voluntarily waived part of their wages after the season was halted, while 25 members of staff were placed on temporary unemployment.

In late May, the team said that riders and staff would work within three 'bubbles' based on the Grand Tours, with the groups' schedules staying separate as much as possible. There are plans for the Tour de France group – led by the Monaco-based trio of Philippe Gilbert, Caleb Ewan, Tim Wellens, plus John Degenkolb – to head to France in mid-July, though they will be avoiding the crowds.

"We'll avoid flying," said Lelangue. "We're looking for a place where not many tourists come, where we can have our own accommodation and dining room. You won't find us on the Côte d'Azur or in Biarritz – we're heading for the mountains in central France."

Team altitude camps, a popular option before a Grand Tour, are off the menu, too, and a full team meet-up is also unnecessary, according to Lelangue.

"Some riders will train at altitude on their own, or sleep in an altitude tent. We don't organise this as a team. In the Tour we have no-one who will ride for GC. The idea is not to fight for seconds every day, so we haven't done altitude training in the past and we won't do it now.

"We had a full team training camp in Mallorca in December, then two in January. Under normal circumstances we wouldn't have a full team camp. It's no different now."

A strict set of protocols has been drawn up by team doctor Jens De Decker, though details have not been outlined. Last month, the team took the step of having a number of their riders undergoing COVID-19 antibody tests, with every test coming back negative.

"This week we expect the UCI's health protocol," said Lelangue. "Our team doctor Jens De Decker has also drawn up a protocol and we'll apply that system to training. We are certainly not going to bring together a large group of 28 riders and the entire staff."