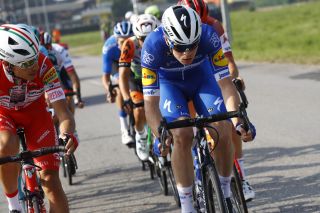 If Rémi Cavagna (Deceuninck-QuickStep) is known for one thing, it's attacking racing, and the Frenchman was at it once again on the opening stage of the Tour of Guangxi in Beihai.

Cavagna, who finished fourth at the race in 2018, wasn't deterred by the circuit around the coastal city being almost pan-flat, and jumped away from the peloton after the original break had been caught, 30km from the line.

He, along with Bora-Hansgrohe's Michael Schwarzmann, stood little chance of staying away on a day that was ultimately won from a bunch sprint by Fernando Gaviria (UAE Team Emirates), but the attempt was trademark Cavagna.

"It was a flat stage, an easy stage, so I tried. But I was sure that the finale would be a sprint," Cavagna told Cyclingnews after the finish on the wide, three-lane highway that made up the day's start and finish straight.

"We rode with Davide Martinelli today, but I tried. You never know, huh? I like to try, and it's the last race of the season. Last year I did a good result in this race, so I'll try to take all the opportunities I have."

Cavagna has two wins to his name this season, claiming stages at the Tour of California and the Vuelta a España via long solo attacks of 75km and 25km, respectively. At the Vuelta, he raced aggressively day after day, whether he was in the break, attempting to get away, or making a late attack.

It was no surprise, then, when the 24-year-old clipped off the front in Beihai. And at the final WorldTour race of the year, there's no reason for him not to keep on trying.

"Maybe [I'll try] tomorrow, but the third stage is different from last year, so we will try there," he said. "But I need to focus on the fourth stage, which arrives on top of the climb. So we'll see, but on that stage I would like to do my best and take good seconds to do a nice GC result."

Stage 4, which has been the sole GC decider in the previous two editions of the race, finishes with the 3km climb to Mashan Nongla Scenic Spot, located north of Guangxi's capital, Nanning.

Tim Wellens and Gianni Moscon have turned stage wins there into overall victory at the end of the week, and it's more than likely that the stage 4 winner this year will do the same. While Guangxi isn't the most prestigious addition to a palmarès, success here would only confirm Cavagna's talent and will to win.

"Every year I progress a few steps, and this year I progressed a big step since I won two nice races," he said. "I hope to win a lot, and to help my team try to be the best in the world. So, I'm really motivated for next year too."

Next year will necessitate a further step-up, at least if Cavagna is to continue his progression. His goals for 2020 are as lofty as a rider's can be.

"I want to try the Classics like the Tour of Flanders and some races like this," he said. "And I want to try to do my first Tour de France, because it's important for a French guy like me. I'm really motivated for this because some stages start really close to my house and one [stage 14 in Clermont-Ferrand – Ed.] starts in front of it."

Before turning his focus to 2020, there's the little matter of the final five stages of Guangxi to think about. There are only 836km of his season left to race, but there's still a lot more to come from Rémi Cavagna.