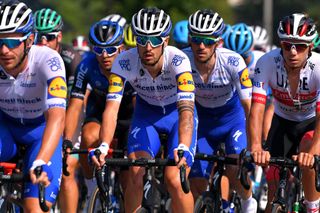 Italy's Mattia Cattaneo became another member of the Deceuninck-QuickStep squad sidelined by injury after he crashed on a descent at the Giro dell'Emilia on Tuesday, and was left with a stable fracture of the D12 vertebral body in his back, which will require six-to-eight weeks of rest before he can ride again.

The 29-year-old crashed out of the Italian one-day race with around 35 kilometres left to go due to would appear to be bad luck, and although his Deceuninck-QuickStep team said in a press release that Cattaneo's fractured vertebra "doesn't require surgery", it will require "a conservative approach" when it comes to the rider's recovery.

"I knew the downhill, as I've done the race several times before," Cattaneo said from hospital in Bologna, "but unfortunately I hit a small stone in the middle of the road with my front wheel.

"I tried to keep my balance, but couldn't do it and crashed, hitting the guardrail," he explained. "It makes me sad, because I was feeling as though my condition was getting better, and was confident for the upcoming races."

Fabio Jakobsen: The doctors at the finish line saved my life

The Belgian WorldTour team's riders have suffered a number of crashes since the restart of the season following the coronavirus-pandemic shutdown. On the opening stage of the Tour de Pologne earlier this month, Dutch sprinter Fabio Jakobsen was left initially fighting for his life after hitting, and catapulting over, the barriers on the finish line, while Remco Evenepoel crashed out of Il Lombardia on Saturday, plunging into a ravine after hitting a brick wall on the descent of the Sormano, leaving the Belgian with a fractured pelvis.

As a result of those crashes – along with a number of other recent incidents, including Bora-Hansgrohe's Max Schachmann being hit by a car driven by a member of public on the course of Il Lombardia at the weekend – there have been calls by a number of riders and their teams for the sport's governing body, the UCI, to take action to make racing safer.