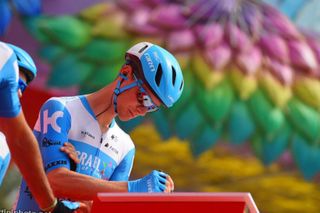 Israel Start-Up Nation (ISN) announced Saturday that they have extended a new two-year contract to Canadian rider Alex Cataford. The Ottawa-native said the WorldTour team feels like a home team and that he's thrilled to continue alongside compatriots James Piccoli and Guillaume Boivin.

"Although their identity is clearly Israeli, there is a Canadian influence in the team," Cataford said. "That's just great because we regularly share stories about our hometowns when we see each other and we understand where we are talking about.

"Also, ISN feels like the Canadian community I know from Ottawa; everyone is friendly to each other, helps each other when needed and it feels like one big family."

Cataford turned pro in 2013 with Garneau-Quebecor before moving to Amore & Vita, Silber Pro Cycling and UnitedHealthcare. He then joined Israel Start-Up Nation in 2019. He has stood on the podium at Tour of the Gila, Tour of Taihu Lake, and at the time trial national championships. He as also placed in the top 10 at Colorado Classic, Tour of Alberta and Grand Prix Cycliste de Saguenay.

Boivin has become a veteran on the team, having joined in 2016 under Cycling Academy Team and Piccoli joined Israel Start-Up Nation this year.

"It is funny, as we have been doing the same races since we were kids," Cataford said. "Although we weren’t racing in the same category, I do remember racing in Saint Martin. It was always the first race of the season: cold and windy. If one, as a cyclist, grew up in Ontario, Quebec, Montreal, Ottawa or anywhere else in Eastern Canada, one would compete there. That’s also how I got to know James and ‘G’.

"Now we all are on the WorldTour level. For me, being on this level, extending with ISN, is a privilege: this is the team in which I belong now."

There are six Canadian riders currently racing on the men's WorldTour, including Michael Woods (EF Pro Cycling), Hugo Houle (Astana), and Antoine Duchesne (Groupama-FDJ), who have all gained their initial experience racing at the top-tier level at the WorldTour Grands Prix Cyclistes de Québec and Montréal, held annually in September.

"Not so many riders from Canada make it onto the level we’re competing, it is a big step for us Canadians," Cataford said. "I feel honored that I am one of the few, and I always have to thank the big cycling community in Ottawa for that, because honestly without them I would have never reached the level on which I am racing now.

"Ultimately, the fact that there are three Canadians at ISN is super special. ISN even feels like the ‘home team’ during the two WorldTour GP’s in East Canada. Montreal is just two hours driving from Ottawa, where I am originally from. Every year, my friends and family watch; it is the race during which I see most familiar faces. It somehow feels like my home race."

Cataford said in a press release that he is looking forward to developing himself further with Israel Start-Up Nation over the next two years.

"I want to be a good, supportive rider for the GC guys in the team and continue the dream with ISN. And then take my chance when I get them. Yes, obviously in those two GP’s: Montréal and Quebec."