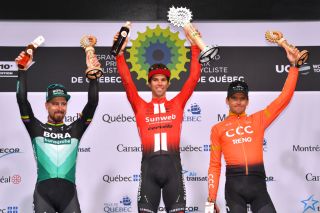 The cycling community received a little more clarity on Wednesday after the UCI announced that it had agreed with the sport's stakeholders to reschedule the Tour de France for August 29 to September 20. The decision came just two days after French President Emmanuel Macron enforced a ban on mass gatherings until at least mid-July due to the COVID-19 pandemic.

The revised date lands directly on top of North America's last remaining WorldTour races, the Grands Prix Cyclistes de Québec and Montréal, which are due to be held on September 11 and 13. In a phone interview with Cyclingnews on Wednesday, race organiser Serge Arsenault said he was prepared to "bite the bullet" because the Tour de France is the only event that could prevent a further collapse in cycling.

"All the races in the world – not only in cycling, but the whole world, in general – have been affected by the coronavirus," Arsenault said.

"I'm glad that the Tour de France will be presented in August through September, even if it is over the top of our races. I'm not only thinking about my races, but I'm thinking about cycling on the whole.

"The Tour de France is the main event in cycling. It puts the bread on the table for the riders and teams, for all of us. Without the Tour de France, most of the sponsors might say they will be back for next year, but that will be too late because you can't go a year without eating. Having the Tour in August, even over the top of our races, is the right thing to do."

The UCI has suspended all cycling events until July 1 and there have been 650 cycling race organisers that have requested cancellation or postponement so far. That represents 30 per cent of the year's UCI International Calendar.

The sport governing body said that it is working with the race organisers – represented by the AIOCC, and the leaders of ASO, RCS, Unipublic and Flanders Classics, in particular, as well as the teams (AIGCP) and the riders (CPA) – to determine a revised calendar. However, it will give priority to the three Grand Tours and the five Monuments.

It will also prioritise the World Championships (September 20-27) and the European Championships, and move the majority of the cycling nations' national championships to the weekend of August 22-23. It will present a revised version of the UCI Women's WorldTour calendar and a new version of the entire UCI International Calendar (men's and women's races across all cycling disciplines) by May 15.

Arsenault has also set a May 15 deadline on which to decide whether to cancel or continue with his two WorldTour races this September. He spoke with UCI President David Lappartient in a lengthy phone call on Wednesday about the potential of moving the two events to a later October date.

"Of course, having the Tour de France over the top of us is not good news for the Grands Prix, but if cycling collapses all over the world, that would be worse than having the Tour, for one year, on top of our event," Arsenault said.

Arsenault said he couldn't work with an October time slot because an early Canadian winter would mean a strong chance of snowfall.

"I'm not an organiser of snow fat-bike races in the winter, and I have to respect the public," he said. "I have sponsors, both public and private, and I have to be transparent with them, saying that the chances of us having a real WorldTour race are not more than 10 per cent."

Arsenault is the President of the Grands Prix Cyclistes de Québec and Montréal.  Each year, the organisation provides chartered airplanes to bring some 400 athletes and team staff from Europe to Quebec for the competitions, all to ensure the sport's most prominent talents are on the start line.

He expressed concern about the health and security of the riders, particularly surrounding the chartered planes, as well as not being able to get a world-class field to Quebec.

"The other important thing is the security and health of the riders. Even worse than cruise ships are airplanes. Will it be possible in September to have my chartered planes in Paris and bring 400 people here? There is a 10 per cent chance of that happening," Arsenault said.

"Against the Tour de France, we could have survived, but I'm a WorldTour organiser – a real one – and I don't want a masquerade pretending to have a WorldTour event when there's a lack of quality riders. I will never lie about who we are or what you will see out on the road.

"I have to decide, will I invest X number of millions of dollars knowing that it won't be a real WorldTour race? Too many people lie about the quality of their peloton. I will not. I will always be clear and transparent."

Arsenault also confirmed that the future of his two WorldTour races is secure, even if he has to cancel them this year.

"I have to work for cycling in general, not only for my races, which are secure from 2021 through 2030. I have to do my part myself. If I have to [cancel], and the final answer will be given on May 15, I will bite the bullet. I respect the riders, the public and the decisions of our small world of organisers. It's only one year in a lifetime. I will not be selfish. We have to work together."

'The Tour is the Tour, alone in its class'

When considering if and when to cancel the Grands Prix Cyclistes de Québec and Montréal, Arsenault is also up against the uncertainty surrounding public restrictions due to the coronavirus. While the UCI has suspended races until July 1, the Quebec government has called for all sport and cultural events up to the end of August to be cancelled, and that date could be pushed back even further.

"Even now in Quebec, we can't organise a mass event before September 1. So, my window [to the original date of the races] is only 11 days," he said.

Arsenault acknowledged that the restrictions surrounding public gatherings could continue to change in both Canada and Europe over the next few months, and that could play a role in his decision to cancel the events or continue as planned.

In addition, a leading expert on testing strategies to fight the COVID-19 pandemic, told Cyclingnews that the Tour going ahead in August could kick-start another spread of the virus in Europe.

Arsenault said the priority is with the health and safety of the riders and public. However, he also said that if the French government lifts health restrictions this summer, he believes the Tour de France must happen for the survival of the sport.

"We could talk in six weeks from now, and the entire cycling season might be done," he said. "But the best-case scenario is that the Tour de France is presented in August for the health and security of cycling. If the Tour doesn't exist, it's a blow for all of us.

"I could have had two reactions when Macron and the UCI agreed that the Tour de France was placed right on my race dates. I could have been pissed off or understanding of the situation. I chose the latter. I have to live with it, and we will have some great Grands Prix next year."