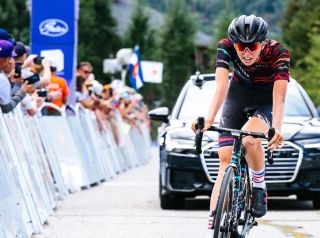 Canyon-SRAM announced Thursday that it has offered a contract renewal to last year’s Zwift Academy winner Ella Harris for the 2020 season. The 21-year-old hopes to continue her development at the top level of women's racing after a successful season as a neo-pro.

"I'm really pleased and excited to be renewing with Canyon-SRAM for 2020," Harris said in a team press release. "I really love the team and feel completely comfortable and happy in the environment; it's without a doubt the best place for me to continue my development as a rider to become as good as I can be. The other riders, sponsors, staff and overall set up is incredible and beyond anything I could have ever imagined being a part of."

Harris competed in her first season as a professional with Canyon-SRAM this season after winning a contract through the Zwift Academy identification program. She played a support role for much of the year, learning from her more experienced teammates, but found personal success by winning the youth classification at Vuelta Burgos, second in the youth classification at Emakumeen Bira WorldTour, and fourth in the GC at Colorado Classic.

From the operating theatre to the pro peloton, Tanja Erath thrives with Canyon-SRAM

Leah Thorvilson: I remember feeling like an outsider and an underdog

"Ella entered the UCI ranks in a fast growing environment and within her first year as part of a UCI team, she made it into the top 20 per cent of the sport, currently ranked 171 [UCI World Ranking]. As a young athlete she has much more to learn and we believe can develop further with time," said Canyon-SRAM manager Ronny Lauke.

"Ella showed extreme commitment to the sport and was determined throughout the season to get the given job in a race done or go for own results. Most impressive was her willpower and the level of suffering she has shown to assure she can be the best possible teammate as well as reaching her goals. The expectations on her for 2020 are to see further development in terms of efficiency and tactical understanding."

Canyon-SRAM started the Zwift Academy in 2016 that allowed amateur riders a chance to train with the team and try to prove themselves worthy of racing at the top level, and then to secure a contract to race in the professional ranks. Last year’s program saw participation numbers double, with 5,000 women taking part.

Harris is one of three riders that have joined Canyon-SRAM through the Zwift Academy. Leah Thorvilson was the first winner of the competition and raced with Canyon-Sram in 2017 and 2018. Tanja Erath was the next winner and secured a contract with Canyon-SRAM for 2018, also renewing for a second season in 2019.

After winning her contract to race with Canyon-SRAM, Harris left her home in Dunedin, New Zealand, where she was studying food marketing.

"When I first left New Zealand in January, there were so many unknowns and adjustments that I had to make. Moving out of home and going to live in Spain when it was only my second time to Europe (the first being the December finals camp) was the first major hurdle," Harris said.

"I also had no idea whether I'd be able to ride comfortably in European races without feeling completely out of my depth. Integrating into a professional squad with so many accomplished and top cyclists and learning how such a team operates both on and off the bike was quite daunting initially. Even my training routine was turned on its head with a new coach and a very new territory for riding.

"A big take home message for me from 2019 is that setbacks are just a small part of a bigger picture and although they may seem frustrating at the time, eventually the issue will be resolved and normality will resume once again. Being able to work through them helped to develop resilience and heightened my tenacity. Essentially, it's important to just never give up and to focus on what you can control, as it's how you manage the adversity that helps you grow as a person."

The 2019 Canyon-SRAM Zwift Academy is currently underway and the three finalists will be announced on November 12. The finalists will join the team at its first training camp in Spain in December, where the winner will earn a professional contract with the team for the 2020 season.

"After three editions, with the winners showing medal success at national championships, earning national team selection on world-class stages, and winning jerseys on a WorldTour level, it has been proven that the Canyon-SRAM Zwift Academy is a program that helps identify talented riders that can be immediately competitive on the highest level of the sport," Lauke said.