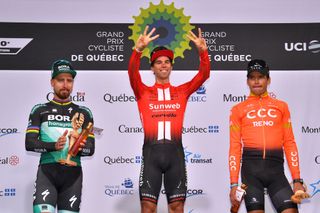 The Grands Prix Cyclistes de Québec and de Montréal – the only two UCI WorldTour events held in North America – face uncertainty with regard to the various coronavirus measures currently in place in Canada, with the race organisation stating on Thursday that it would make a decision on the mid-September races by July 31.

The two one-day races have become an annual attraction to riders targeting the World Championships. With the GP de Québec set for September 11 and the GP de Montréal on September 13 this year, that will remain the case this year ahead of the Worlds in Switzerland (September 20-27), but the Canadian races do now clash with the rescheduled Tour de France (August 29-September 20).

The names on the start lists are the least of the organisers' worries as things stand, however. A statement released by the race organisation on Thursday pointed out the fact that there is currently a mandatory 14-day quarantine order in place for arrivals into Canada, in place until at least August 31, making things difficult for riders, team staff and media travelling there.

The same statement also pointed out that the holding of large events in Quebec is banned until August 31, with the implication that such a ban could yet be extended as the uncertainty regarding international travel, public gatherings and hotel accommodation continues in light of the worldwide COVID-19 pandemic.

WorldTour races in Québec and Montréal to go ahead as planned

"With eight weeks to go until the races, the current directives issued by the various European, Canadian and Québec public health authorities involved represent various types of uncertainty, which in turn mean multiple operational and financial challenges for the organizers," read the statement.

"As a responsible promoter, we will make whatever decisions are required, not only to ensure compliance with health requirements, but also to compensate for the operational and financial impacts on our organization should the Grands Prix Cyclistes de Québec and de Montréal (GPCQM) be held under the conditions now prevailing.

"Out of great consideration for all of the global cycling stakeholders involved (teams, riders, support staff, and governing bodies), our partners, the public, and our loyal team, we will therefore be announcing a decision regarding the presentation of the 2020 GPCQM by July 31," it read.

"We remain in close contact with our public- and private-sector partners, as well as with all cycling bodies and public health authorities concerned, with a view to remaining properly informed and making the most respectful decision for everyone," concluded the statement. "In these difficult and uncertain times, our priority remains the health and safety of everyone."

Four riders have dominated proceedings in Montreal and Quebec City in recent years: Michael Matthews, Peter Sagan, Greg Van Avermaet and Diego Ulissi. While Sagan and Van Avermaet are set to ride the Tour de France for their Bora-Hansgrohe and CCC Team squads, respectively, Matthews has surprisingly not been picked by his Sunweb team for the Tour, and so could headline the events he's won a total of three times: Quebec in 2018 and 2019, and Montreal in 2018.

Providing Ulissi doesn't ride the Tour – he's set to ride October's Giro – the Italian could also be back to again try to repeat his Montreal victory of 2017, having taken second place behind Van Avermaet there last year.