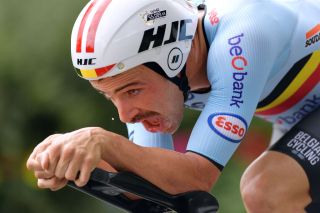 Victor Campenaerts, who'll join NTT – formerly Dimension Data – next season, will scout out both the Olympic time trial and road race courses in Tokyo, Japan, in mid-November, despite having to wait until May next year to hear whether he'll be selected to ride for Belgium at next summer's Games.

According to nieuwsblad.be, the World Hour Record holder will be in Japan from November 10-16 with his new team's Japanese sponsor, NTT, along with teammates Edvald Boasson Hagen and Samuele Battistella.

"I'm also taking my bike and am going to explore the Olympic time trial and road race routes," Campenaerts told Belgian newspaper Het Nieuwsblad's website. "Not that I'm going to blast it as 50kph; I'm still in rest mode, but I think it would be ideal to ride the course. You get a lot more out of actually riding it than you can from looking at maps or watching videos."

Campenaerts' most likely rival for the second of the two Belgium berths for the Olympic time trial will be current national time trial champion Wout van Aert (Jumbo-Visma), although Van Aert's teammate Laurens De Plus and Deceuninck-QuickStep's Yves Lampaert also remain in the mix.

By virtue of becoming European time trial champion earlier this season, Lampaert's Deceuninck-QuickStep teammate Remco Evenepoel has already qualified for one of the places. Van Aert, however, recently told news agency Belga that he "won't beg" to be part of the squad for the time trial on July 21, saying that it was "up to the federation to contact its best time triallists".

An added consideration for Belgian selector Rik Verbrugghe is that the Olympic rules require the members of the time trial team to also ride the road race, taking up two of only five spots for the hilly massed-start event on July 25, and so the riders' road-racing form and credentials will also come into play.

Regardless of that decision in some six months' time, Campenaerts said that while in Japan next month he'd also be looking into the possibilities of doing an altitude training camp on the lower slopes of Mount Fuji ahead of the Games.

"I know it's not certain that I'm going, but I don't want to leave anything to chance," continued the 28-year-old, who leaves Lotto Soudal this year after two successful years with the Belgian WorldTour team. "If I am going to go, I want to be prepared to perfection.

"After taking part in the Giro d'Italia – which with three time trials next year is ideal for me – I'd take a short break and then go to Japan in mid-June for an altitude training camp," said Campenaerts. "Mount Fuji is more than 3,700 metres high, but there's a location with facilities for a training camp at 2,000 metres that looks ideal."