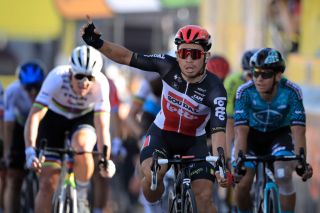 Before stage 11, Caleb Ewan (Lotto-Soudal) had described the flat run to Poitiers to France Télévisions as “the last chance before Paris” for the sprinters in this year’s Tour de France, and the Australian sprinter seized that opportunity with both hands.

Despite the pressure and even with a serious lack of support teammates – Lotto-Soudal have already lost three riders, including two on the opening day – Ewan was perfectly positioned in the twisting final kilometres in Poitiers as he claimed the fifth Tour stage win of his career, taken very narrowly against Sam Bennett (Deceuninck-Quick Step).

In a blanket finish between the best sprinters in the race, Peter Sagan (Bora-Hansgrohe) was second across the line but he was relegated to the back of the bunch for barging Wout van Aert (Jumbo-Visma) in the sprint.

“It was very close, I’m very happy, I was a little more forward than I wanted to be, but with a headwind finish I knew I had to keep calm, and wait for the right gap to open,” said Ewan, who inched past Bennett in the last metres.

Roglic: Van Aert had to work, not sprint, on stage 10 of the Tour de France

Sprinters usually have a sixth sense for if they have taken the victory, but Ewan admitted on this occasion, after making a mammoth effort to beat Bennett, that he had no idea if it had proved enough for the win.

“I saluted, just in case. But I did a big throw and when you do that, you’re looking at the ground. I haven’t seen the photo, but I think it’s quite close,” Ewan said.

The Australian’s lack of team workers, too, meant that Lotto-Soudal had had to play things smartly.

“It’s not an ideal situation for hectic days, when you need to be there from a long way out, and the stress here starts with 60 or 70 kilometers to go. We had to gamble a bit,” Ewan said.

“I told my team that I really had to be on the front in the narrow part dropping into town because I knew that’d be where it’d get hectic, and they got me there in position. We stayed calm, too, despite Bora’s and Quick Step’s breakaway. I had the easy job in comparison to them to try and finish it off.”

With his eyes firmly on the finish line, Ewan was also oblivious to the high-speed entanglement between Van Aert and Sagan. Ewan was notably diplomatic in his discussion on why Sagan had sprinted the way he did, although the ‘oh!’ that he audibly uttered as French TV asked him to watch the finale unfold on a replay perhaps said as much as his subsequent comments themselves.

“I mean, you know, in the end, we’re all really in the heat of the moment and it’s a Tour de France stage on the line. You’re not always thinking about safety, all you’re thinking about is getting to the line first,” Ewan said. “I’m sure Peter when he did that, he meant no harm. Ok, it looks quite bad on TV and maybe he shouldn’t have done it but I’m sure he didn’t mean any harm by it.”

Although Ewan appears – narrowly – to have the upper hand in his ongoing shoot-outs with Sam Bennett, the Lotto-Soudal sprinter rejected the idea of fighting for the green jersey against the Irishman this year.

Ewan is currently fourth in the green jersey rankings, with 155 points, nearly 100 less than Bennett who has 243.

“I didn’t have that goal before the Tour started, and if I wait until halfway then it’s too late, the guys have been picking up points in the intermediate sprints throughout,” Ewan reasoned.

“Last year I was happy with three stages wins, this year I’ve already got two. Five is quite an achievement and I’ll go for the green jersey in the future.”

After taking his second victory here, Ewan is currently on an equal standing with Van Aert as the only rider with two stages to his name in the 2020 Tour. And further duels with Bennett will surely unfold in the final week – in Paris, if not before.